Nag-o-Meter
Looks like you haven't been here long enough to have wasted any time.
An 888 word history of
The Atari 2600 Webserver 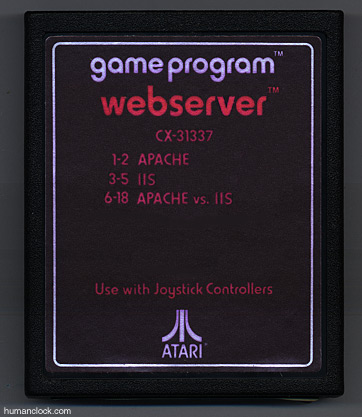 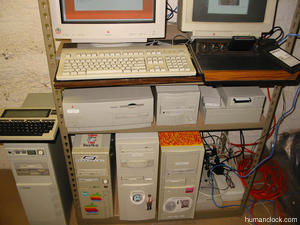 Due to the increasing popularity of humanclock.com, the server load of the Tandy Model 100 webserver proved to be more than it could handle. Humanclock.com's technical staff recommended a new webserver be added immediately. After a years worth of actual meetings, meetings about meetings, ignorant infighting, elevated egos, and beligerent backstabbing; Humanclock.com's middle management determined that a new webserver was indeed needed, and it had been their idea from the start.

Due to blowing the budget on meetings, the new webserver would yet again have to be created from something in the basement.

The office basement was searched for an electronic device. Several items were located. The first candidate was a very rare Texas Instruments' Speak & Swear. This item was purchased at a 1987 yard sale in Naches, Washington. The Speak & Swear's history is bleak to say the least. Texas Instruments created the popular Speak & Spell, Speak & Read, and Speak & Math devices as fun educational toys. Studies showed that kids using these devices excelled over their peers in spelling, reading and math. The downside was this also increased the amount of physical abuse from the jealous stupid kids. TI's marketing department didn't want their client base being beaten to a pulp on the playground. They realized they needed to make these smart kids sound tougher, hence the Speak and Swear was created.

Anyway, we are off on a hypotenuse. Back to the Atari webserver. Several old Atari 2600 VCS units were located in the basement. One engineer noted that "VCS" stood for "Video Computer System", therefore this "computer" could indeed be used as a webserver. Someone pointed out that the Atari 2600 only has only .000125 MB of RAM. (128 Bytes). (see memo below).

An original 6-switch model was selected for the webserver, mostly for the same vain reasons a vintage clawfoot bathtub was put into the employee bathroom. It just looked cooler.

The webserver is controlled by the "Star Raiders" controller. The main reason was because we wanted to finally have a use for all those bottom buttons that the Star Raiders game never utilized. This ended up being counterproductive, since the only button used on the controller was the original button labeled "Computer On/Off".

Cartridge built, controller working, now all that was left was to modify the 2600 unit to handle Ethernet. An Atari 2600 wiring schematic was needed. Conveniently there were two 800 numbers on the back of the unit. These numbers were called, but unfortunately they were disconnected. A bunch of forgotten details later, after a lot of error and a bit of trial, the Atari 2600 Webserver came to life. 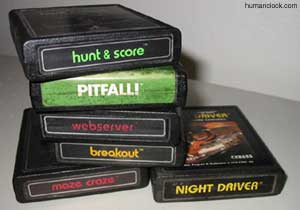 During the early AM hours when humanclock.com isn't so busy, the Atari is taken offline and the security guards team up against the web guys on Maze Craze. Note: "Hunt & Score " is an educational game, not some sort of dating game. 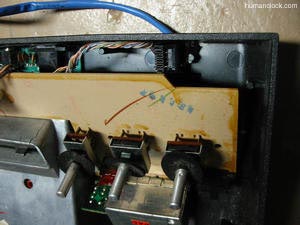 The complex rewiring was done in "Vapour Circuitry", thus when I opened up the original prototype machine to take a photograph, the airtight seal was broken. All of the circuitry turned into a gaseous state and was released into the air. Unfortunately, all that was left over was the original Atari 2600 wiring as shown here. 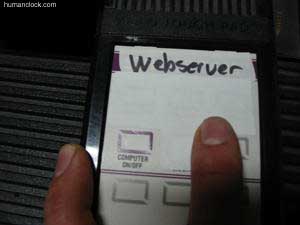 We hoped to find a use for those bottom buttons on the Star Raiders controller, but only ended up using the one labeled above 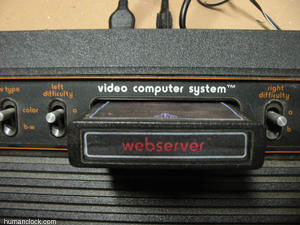 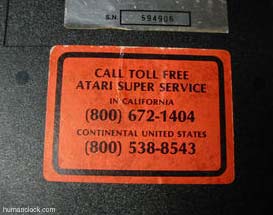 Tried calling to get a wiring schematic, but nobody answered. Got desperate and emailed a friend in California who got the same result 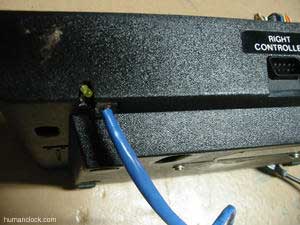 RF out port rewired to handle an RJ-45

Screen shot from the Webserver cartridge

Pros:
* unit is an original 6-switch model Atari 2600, thus giving humanclock.com the image of being "retro-cool" instead of just "retro". Nerdy Humanclock staff members might even be able to pick up nerdy girls with the unit.

* during the early am hours when traffic is minimal, we can take the webserver cartridge offline and use the Atari unit to play Missle Command. Judging by current political agendas, it looks like it might come handy someday.

Cons:
* system only has 128 bytes of memory. This means we cannot use the webserver to actually serve any images. Looks like we will only be able to use the new webserver to store the amount of people who have clicked on the page about girls running naked through the streets of Washington.

* requires 3 volts more power than the Tandy webserver, accounting/budget departement isn't going to like the extra 32 cents per year it will take to run this thing.

* I'm uneasy about this whole thing, I think that quote from Steven Levy's "Hackers" book says it best, this is something "akin to the courting of the bitch goddess of disaster". 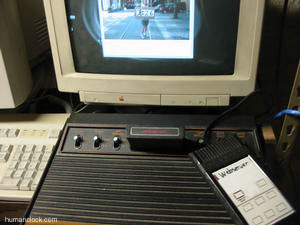 (Note: Since I ran out of funny things to say about the Atari 2600 Webserver, this sentence is here to make this entire page exactly 888 words, no more, no less, just 888 words exactly. Word up!)
© 2001-2023
"Human Clock" is a registered trademark of Daniel Craig Giffen
the home of 29,230 clock photos
and 20.6 hours of clock video
contact | twitter