Nag-o-Meter
Looks like you haven't been here long enough to have wasted any time.
The Tandy Model 100 Webserver 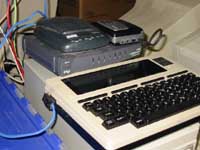 With names like Western Family, Realistic, Tandy and TDK; humanclock.com's middle-management attempts to cut every corner possible when it comes to industrial-strength webhosting. Many web hosting companies use expensive servers with complex software for their web operations. Our engineering staff rewrote the popular Apache webserver software to run on an 18 year-old portable computer with 32k of memory.

Humanclock.com runs on a Radio Shack 2.4mhz TRS-80 Model 100 portable computer, using a stripped-down version of the Apache webserver software (version 100-BASIC.12 beta). The graphic files are stored on magnetic tape accessed via a modified Radio Shack personal cassette player (CAT NO. 14-1215). The webserver is powered by a 6 volt TRS-80 AC Adaptor (CAT NO. 26-3804). We take our web hosting very seriously at humanclock.com, therefore we have installed 4 "AA" batteries in the webserver in case of power failure. Whereas some battery backup systems last for only 20 minutes and cost hundreds of dollars, our power backup solution lasts for 20 hours and costs $2.49, (due to it being double coupon Tuesday). In the case of power outage however, it takes our webserver about one second to come back online, something that would take a common UNIX/NT system over two minutes. 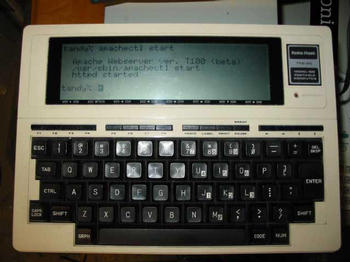 Apache software in action
We hired a crack team of crafty crack monkeys that were able to modify the Apache source code and reduce it down to a 25k text file that runs under the BASIC interpreter native to the Tandy TRS-80 Model 100. Those were some smart monkeys.

Our engineering department was able to rewire this ordinary personal cassette player (not to be confused with a 'walkman'), to handle the vast storage needs that humanclock.com requires.

All I/O is performed through the headphone jack.

The storage media consists of a single TDK type I cassette tape. The 'Rigid-Construction cassette mechanism' gave our IT deparment an overwhelming sense that it was 65 cents well spent. We estimate that roughtly 4 gigabytes of data can be stored before we have to turn over the cassette and record over the side labeled "Kick ass Toto mix tape". 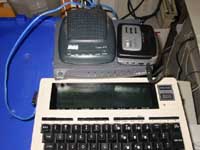 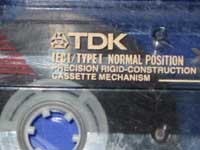 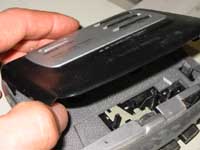 Our storage device
October 23rd, 2003
This just in! Digging though my photo archives I found a juicy-gossipy picture of the Tandy 100 computer. Seems that in his pre-humanclock days, the Tandy was all about serving the ladies instead of web pages. Here is a September 2000 photograph of the "server" outside a strip mall in Tempe, Arizona: 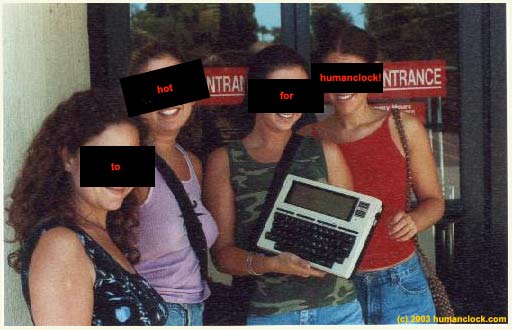