Nag-o-Meter
Looks like you haven't been here long enough to have wasted any time.
Submit Some Photos
Yes! You too can submit photos to humanclock.com, but first you need to login or create an account first.

I know this is annoying but we were receiving too much garbage and people were typing in their email addresses wrong. Feel free to use an alternate email address you use for this sort of thing, we just need a way of contacting you concerning your submissions. 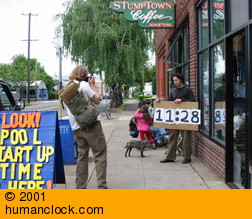 Wanna be famous for a minute? Tired of seeing nothing but photos in Portland, Oregon? Then send in a photo!

Here is a list of all the digital timeslots and how many photos occupy each minute.

The very pushy-sounding rules
The high-school guidance counselor sounding rules
The San Francisco Power Lawyer-sounding stuff
Photo Comments
With each photo you can tell users a little bit about the photo. Use "photo comments" section to tell viewers a little background on the photo you are submitting. It might be a specific description of where the photo was taken, and/or anything that might have happened before or after you took the photo. Feel free to include comments directly to the admin if needed.

Comments are reviewed and edited for clarity by an admin. Things that (usually) do not make the cut include

• website urls
• first and last names of people (unless you have their permission or they are publicly known people)
• witty caption puns (eg: "Time to __________")

Humancalendar photos
Humanclock.tv videos
The video clock is a lot more of complex of an operation. The videos are all need to be edited and have a lot of post-processing done to them. Videos are also a lot less forgiving in general. How people interact with photos is much different than how they interact with video. 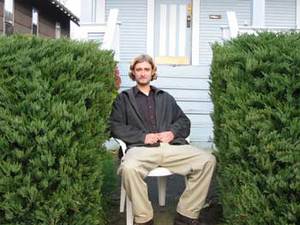 There is no time in this photo.

These are not even clock photos! The first photo has no time in it. To this day I still receive photos with no time in them. With the second photo, the time has been added long after the photo was taken. (currently 14 years). Yes, this is me with the Camaro I owned in high school. (Winger cassettes not pictured). Cat Schwartz of Tech TV fame called my Camaro "hot".

Although I sold the camaro in 1993, somehow the snow tires managed to stay in my parent's pasture for the next 12 years, complete with "Americana" weeds growing though them. When I bought my house in 2005, Dad told me to move them to my new backyard, where they now sit awaiting weeds to grow though them. 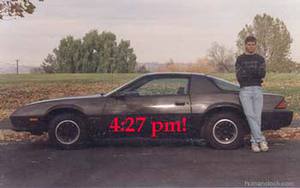 The time needs to be part of the original photo. Also, I no longer have this Camaro, but the snow tires are still in my parent's backyard, now with three foot high weeds growing though them. (how Americana!)

2005 update: They are now in my backyard, one is a planter and the other is holding down the lid of the compost bin. 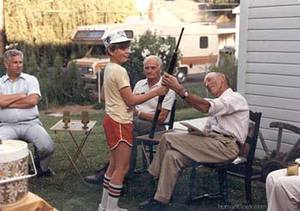 There is no time in the photo, plus it is from another era. (eg guns+kids, tube socks, painter's caps were trendy, and vintage shorts that would cost $300 now)

"Kinda-been-done-already" photos
Although the examples below are technically clock photos, they have been done so many times already that I rarely put them into the site. Creative and unique photos keep humanclock.com interesting, redundant photos make it start to feel like a visit to a generic strip mall. It's not that the photos are boring, it is just that everyone else has had the same idea already. 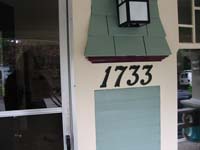 Ahh, the house address. Many people have them! 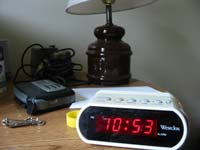 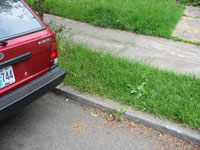 License Plate (or number plate as Europeans and Australians call them) 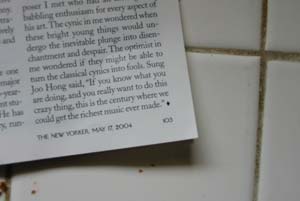 Some people would find this cool, others would find it boring, the main point is that the "time" is REALLY hard to read. 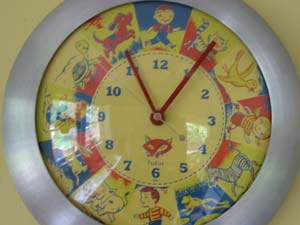 Photos of existing clocks with nothing else in the photo.
Keep in mind that a large majority of the people watching humanclock.com during the day are people stuck inside a building, sitting in front of a computer. Show them the outside world! You'd be amazed at the cool photos you can take if you leave your comfy computer chair.

Webcam photos I don't accept just because the quality is rarely good. 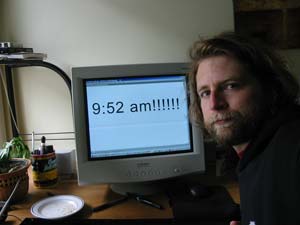 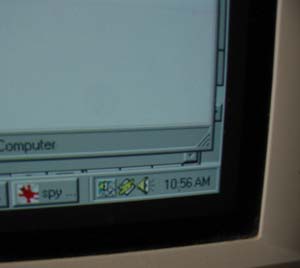 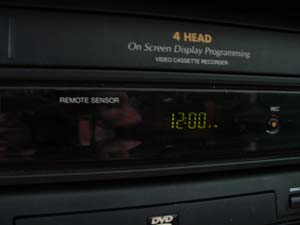 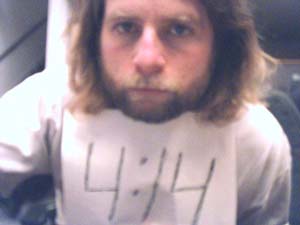 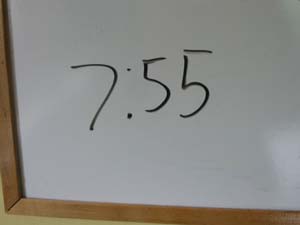 Unless your name is Andy Warhol or Yoko Ono, people would call this photo "dross" or "boring".

(If you were Andy or Yoko, then it would be described as an "enigmatically seminal statement reflecting the equation of the moment within a perpendicular universe")
...becomes a much gooder one! 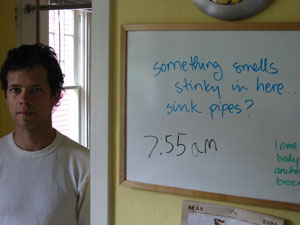 By standing back a bit to capture more elements within the photo, such as a note to roommates and a nice medical student named Gonzo, the photo becomes a bit more i nteresting.
© 2001-2023
"Human Clock" is a registered trademark of Daniel Craig Giffen
the home of 29,230 clock photos
and 20.6 hours of clock video
contact | twitter