Nag-o-Meter
Looks like you haven't been here long enough to have wasted any time.
Note: This page is here just for historical reasons since the contest ended, like 624,114,960 seconds ago.
you could win a
Vegemite
Sandwich!
At 3:02 am, Pacific Daylight Savings Time, July 16th 2002, humanclock.com will offically be one year old. In order to celebrate, I'm running a photo submission contest. Since I'm currently biking around Australia, I thought I would give the prizes a bit of an Australian theme. Most of you born before 1980 will recognize first prize. If you were born significantly after 1983 and don't recognize the significance of first prize, I suggest tuning into a right of the dial radio station whose playlist leads one to believe that popular culture existed solely between "My Sharona" and "The Sun Always Shines on TV". Somewhere in the "wide variety of songs" they will play (i.e. nine), one will have a catchy little flute riff. This is the song first prize is in reference to.

Simply put, all you have to do is send in a clock photo between now and August 31st, 2002. In early September, the contest will be judged by me along with a diverse group of friends. This group includes art snobs, a compiler engineer, a guy named Dave, a handful of archtitects, a girl born in Lithuania, a couple GIS dudes, a guy in San Diego who ran 150 miles through the Sahara Desert for fun, a guy who is in a picture circulating on the Internet where he is shaking Al Gore's hand and a guy in the background is picking his nose, Teresa of Troy (NY), a Melbourne couple with a cat named Rufus, a hydrologist in Alaska, the happy guy holding the belt sander below, the original 11:11am girl, the only democratic voter in Texas, my parents, a land surveyor who weekends as a tea dealer, two girls from Jersey, a woman pregnant with a girl in Santa Monica, California, Jim Sandpaperberg, a girl who saw Nirvana play at a house party in 1987, a hardcore Iron Maiden fan, a guy whose last name is "Lover", a former Dodge Colt owner, Barman B from Yakima, half the town of Bridport, Tasmania, and a bunch of other people.

You will be able to enjoy a tasty Vegemite sandwich. I will mail you most everything you need to create a Vegemite Sandwich. 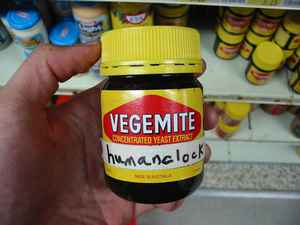 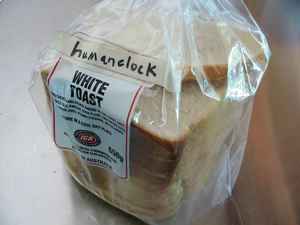 a loaf of bland white sandwich bread full of preservatives and a taste similar to wallpaper paste
Due to the fact that humanclock.com is privately held by me with about $30 in venture capital, I'm going to leave it up to you to provide the following items if you win first prize (optional of course...but it will greatly enhance your prize winning experience):
Note:
Although Australia has many fine bakeries, I will be mailing you a traditional loaf of preservative-ridden white bread. This will ensure that the loaf of bread (hopefully) will be "fresh" when it arrives on your doorstep. Note: I cannot guarantee the bread will be safely edible when you receive it...this is your call. The sealed jar of Vegemite should be good until the noted expiration date, most likely some time in 2004. 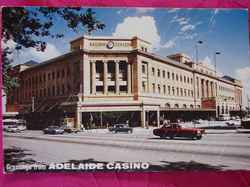 I will mail you this vintage Australian postcard (circa 1978) of the Adeladie Casino and Railway station. On the back of the postcard I will write a funny joke about a grasshopper walking into a bar. I cannot guarentee you will be able to read my handwriting however. Due to the kitchy retro nature of this postcard, your chances of picking up a trendy vintage girl and/or a slick stylin' guy will go up dramatically. Better yet, there is even a clock on the building indicating the time is 10:10am.

Note for residents of the United States only:

Adelaide is a town in Australia. Australia is a continent located in the southern hemisphere of the planet Earth, one continent to the left and one down from the one you are currently on. A continent is a large piece of earth moving on an independent plate upon the Earth's crust. Earth is currently the planet you are residing on. If you are still confused, just remember that Australia is where that Crocodile Dundee guy and the dude who yells "Crickey!" are from.
Iffy 3rd place prize:
Your picture on humanclock.com! 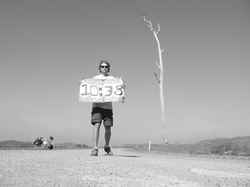 a more artsy than fartsy clock photo
If your photo is accepted you will win 3rd prize. The prize is the simple fact that you will be able to see your clock photo on the humanclock.com website and your friends will be amazed at your ability to follow the contest rules. 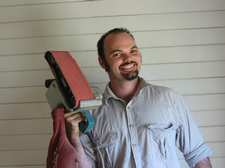 This Emu Park, Australia resident submitted a belt sander instead of a photo...still a winner!
Just so nobody gets their feelings hurt, you will win fourth prize just for entering. Fourth prize is just that...fourth prize. You don't win anything specific other than the fact that you can put on your resume that you won fourth prize in a humanclock.com photo contest. If you try and upload your Windows registry file instead of a photo, you are a winner! If you think about taking a clock photo for the contest and put it off so long that the contest is over...you are still a winner! If you scan in an old picture of your dog from 1969 with the time typed across the the center of the picture...you are STILL a winner!
Pictures will be judged on:

Readablity.
Can the time in the photo be read when the photo is reduced down to 450x338 pixels? On the cardboard clock that I drag around, the numbers are all about an inch (3cm) wide and take up a full sheet of paper.

Creativity/Uniqueness/Artsy-Fartsyness.
Be creative! Be unique! Be arty-fartsy! Typing the time out on your computer screen and taking a picture of it will ensure you won't be tasting Vegemite any time soon. If you look at the submissions gallery you will see kind of what I'm looking for.

Humans.
Although not a normal requirement for submissions, the clock must have a living/breathing person in it.

Other rules and disclaimer stuff: