Nag-o-Meter
Looks like you haven't been here long enough to have wasted any time.
Note: This page is here just for historical reasons since the contest ended, like 624,119,687 seconds ago.
Since I'm down in Australia right now, I thought it would be fun to have an Australia themed contest on this website. When you ask non-Australians about Australia their knowledge revolves around: kangaroos, that Crocodile Hunter guy that says "crickey", Crocodile Dundee movies, and that Radio Birdman was by far their best musical export. Another thing everyone seems to know about is an old song from 1982 called "Down Under" penned by Colin James Hay and Ron Strykert:


Buying bread from a man in Brussels
He was six-foot-four and full of muscles
I said, "Do you speak-a my language?"
He just smiled and gave me a vegemite sandwich.

So, I decided to run a photo contest with a vegemite sandwich being first prize. First prize has been modified since the contest ended. I'm mailing Five Australian Dollars in place of a loaf of bread. In the time since I started the contest, I've discovered that bread down here goes moldy after a few days. This is quite different to the preservative laced stuff you can find in the USA that keeps for roughly 12 years.

Thanks to everyone who entered the contest. I will be running another contest sometime in the near future.

"The human is Abigail, age 7, 2nd grader at Edgewood Elementary in Homewood (near Birmingham) Alabama. Her 6th grade sister Samantha helped plan the shot and they did several humanclock pics together (Samantha is in a shot at 1:10 pm, eating watermelon). They have three cats (counting a stray that hangs out here) and a little dog. They have a Mom who helped with e-mailing the photos and a Dad who taught them to like Dylan and Marley. The cat is named Oreo, but he has several unflattering nicknames (meany-cat, stink-o-potamus, kitty-bin-laden, etc.) due to his annoying habit of biting fingers and toes. Maybe vegemite smeared on toes will curb this habit...?" 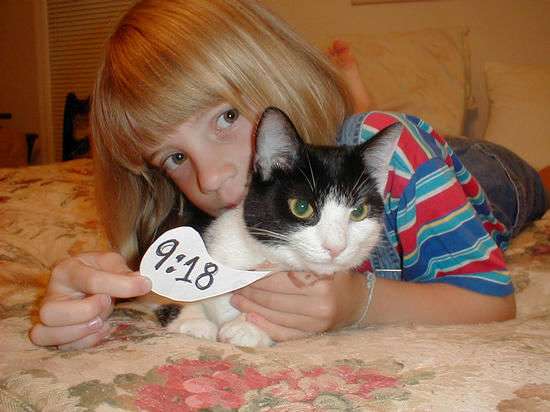 Steve writes:
We'd like to thank everyone who made this possible, including but not limited to Goatgirl Productions. Bob, Laurie, all the fine goat kids, and last, but not least, a big shout out to Mr. Mike, for his love, encouragement and extensive knowledge of ruminant culture. This photo was taken at Bob and Laurie's dairy goat farm in Richland Center, Wisconsin in the spring of 2002. 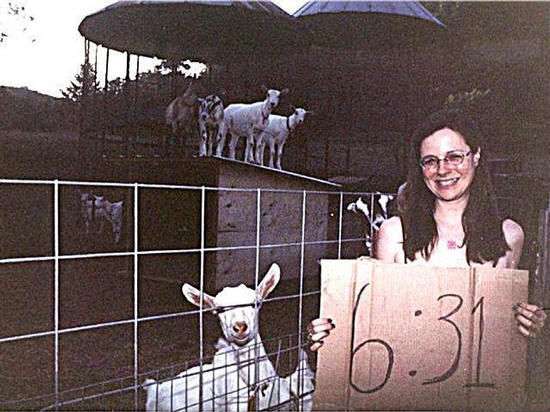