Nag-o-Meter
Looks like you haven't been here long enough to have wasted any time.
"01 vs. 11"

My initial plan was to put the new "reissued" Human Clock website online in time for for its 10th anniversary. As part of the "bonus material" that comes with any sort of reissue, I thought it would be fun to retake some of the clock photos from 2001. Obviously the new site isn't done, but I still spent a few days in July 2011 walking around Portland retaking 203 photos that were taken 10 years earlier.


* (really, I counted. I'm only missing about three months of logfiles so this is close enough.) 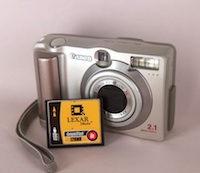 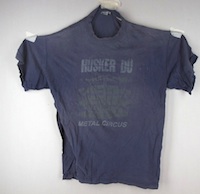 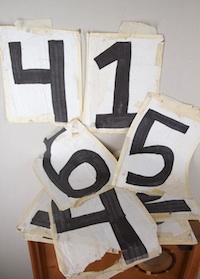 ...taped to this cardboard 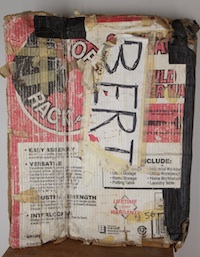 ...various friends and I walked around Portland, Oregon taking photographs of people holding up a "time". People were incredibly helpful and we had a lot of fun. I met a lot of new people and got invited to a crazy Hawaiian Party one night where I took most of the 12-1am photos in one swoop. After a marthon coding seesion I put the site online early in the morning of July 16th, 2001.

The original July 2001 site was pretty simple and I made most of the graphics with color crayons and my scanner. For people on slow modem connections, it even had a "text" only version of the site without graphics. I outgrew this verison of the site and put a new version online in December 2001. The biggest annoyance I had back then was that web browsers were TERRIBLE when it came to any sort of standards. Trying to detect the user's timezone was a complete pain, especially since back then a lot of web users didn't have javascript/cookies enabled on their browser.

Since the web was a much smaller place in 2001, it was a lot easier to be the prettiest flower in the room (work with me here, or fill in your own analogy). The site was a Yahoo Pick of the Week (and year), on slashdot.org, plus I did several local and national radio interviews. I do remember one national interview that I was pretty nervous for, the six pack of beer really helped with witty comebacks.

On February 1st, 2002, I left Australia to bicycle around Australia. I was gone for 17 months and took a lot of clock photos.

I put most of the current version of the site online in 2004. The site stayed busy and got a mention on Time magazine's website, one of those "Page A Day" calendars, Stern (Germany), a US Airways Flight Magazine, and Rocketboom. The site langished a bit from 2005-2009 mostly due to the fact that I bought a needy house and started working full-time. Doing LAMP (Linux/Apache/MySql/PHP) programming fulltime really killed my desire to work on this site during my free time. I did however start The Human Calendar in 2007.

Oh yeah, Microsoft had some sort of online scavenger hunt marketing campaign called "Our Colony" for the new XBox and they used the Human Clock site as an (unwilling) participant. Bandwidth usage went through the roof! The funny part is I had a bunch of kids trying to learn more about me even though I had nothing to do with the marketing campaign. I did throw out a red herring and confused them though. "He likes Mission of Burma".

I started a new version of this site in 2009 that is getting closer to being done. In the May 2011 I did pull a few elements from the new version of the site and place them into the current site that you see now.

Taking the "10th anniversary" photos
Although I carried the original cardboard sign with me, I opted not to use it and just take a photo of each location as it appears now. This wasn't due to any sort of pretentious Jim Morrison-ish artsy reason, it was strictly due to logistics. I've lost touch with some of the people in the photos and to reproduce each photo in the exact location would have required more time and equipment than I was willing to lug around town. I'm not one to shy away from eternally laborious tasks, I just have other eternally laborious tasks (new Human Clock and Human Calendar websites) to get finished.

Taking the photos was a fun experience. It was really interesting to see objects that had disappeared, yet some sign of the object's existence still remained. A few people (naturally) asked what I was doing. Taking little steps in every direction, looking perplexed, and taking photos the whole time probably did make people wonder. Some photos I couldn't even come close to reporoducing because the buildings had been torn down.

Especially downtown, there would be a person standing/sitting/playing guitar right where I needed to be. I got lucky with the photo of Satyricon because two days later they had the whole entrance fenced off. Another time a guy had a minor freakout over me taking his picture even though my camera wasn't really pointed at him. I later took a photo of him when he wasn't looking though.

The photos below and on subsequent pages were all taken in Portland, Oregon unless otherwise noted.

Technical stuff
In the "keepin' it de facto" department, I used the same Canon A20 2.1 Megapixel camera that I used in 2001. The camera must have about 30,000 photos through it by this point. It survived half of a bicycle trip around Australia before dying in the town of Katherine in the Northern Territory. It was still under warranty so I got it fixed and never really used it again until this year.

One big mistake I made in 2001 was to shoot a lot of the initial photos using the worst possible resolution setting, 640x480. Back then a lot of computers ran at 640x480 resolution and 1600x1200 images took forever to download and manipulate. The 128 megabyte memory card ($200!) would only hold so many photos and I didn't want to have to keep going home to unload the photos. As Cherilyn LaPiere once sang, "If I could turn back time", I would have GLADLY spent another $200 on another memory card just so I would have taken the photos at a higher quality setting.

Time travel fantasies aside, for the 2011 recreations I took them on the highest setting possible. (using a 1 gig card this time...that would have cost $1200+ or so had they even existed back then).

The photos turned out pretty well. I tried shooting them at the same time of day and under similiar weather conditions. For the most part they roughly line up. The LCD on the camera is barely an inch square so I would miss details that would help in lining things up. The only way to truly get the old and new photos to line up exactly would have been to drag a tripod and my computer around town and spend a few weeks recreating the photos.

We were coming back from a client meeting downtown and Kat and I both saw this, said "Wow!", and thought...

Me: (that would be a unique clock photo)
Kat: (he's dreamy) 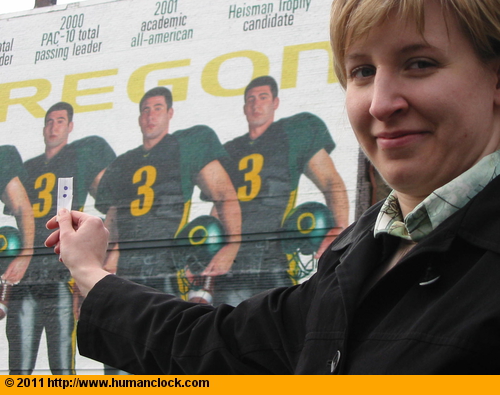 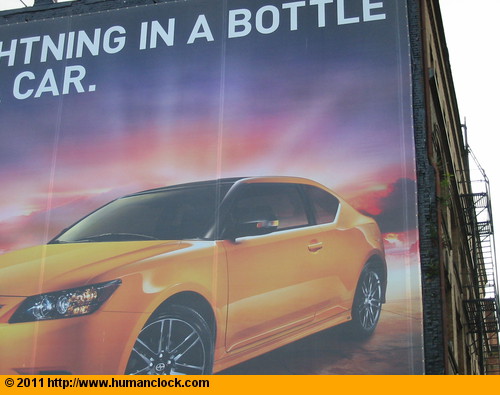 I don't have a photo of it, but there used to be a sign in an adjacent window that read "Chili Today" 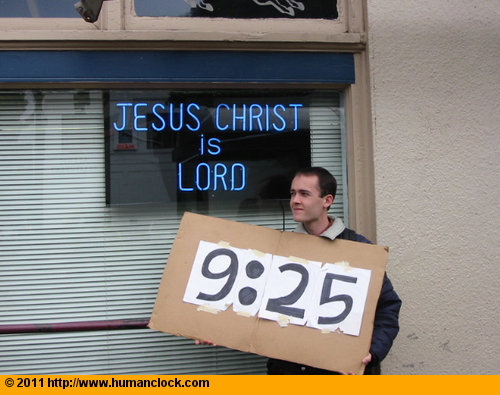 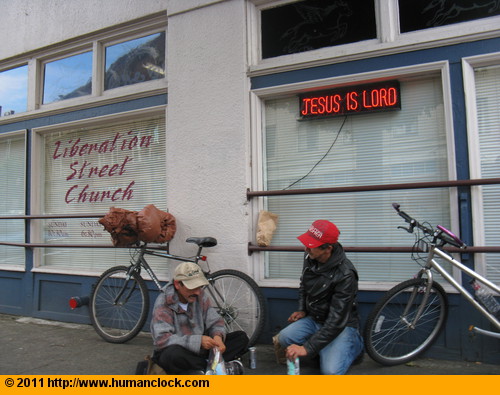 I was mostly surprised that Radio Shack was still in business. I loved this place as a kid. I stopped loving them after they became upsell central and less techie. 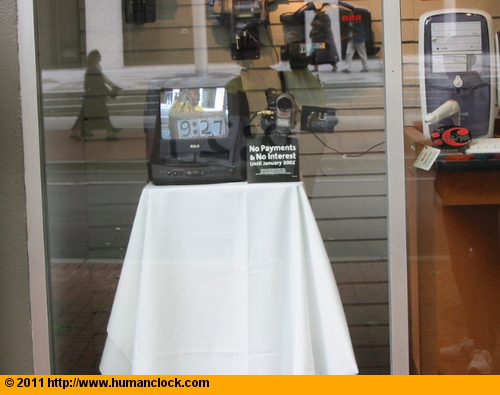 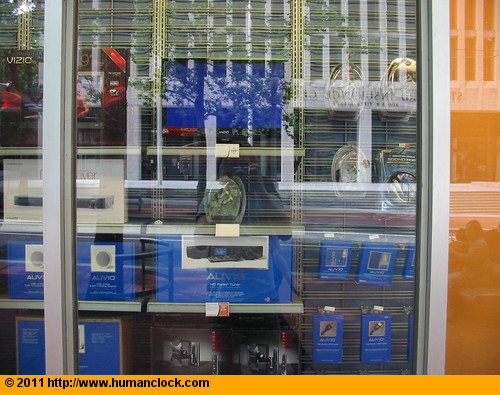 I didn't actually find this food cart since there has been a FOOD CART EXPLOSION in Portland within the last 10 years. So for 2011 I just substituted a food cart with a unique name.

I think the Google link under the photo is pretty close to the original location from what I can remember. 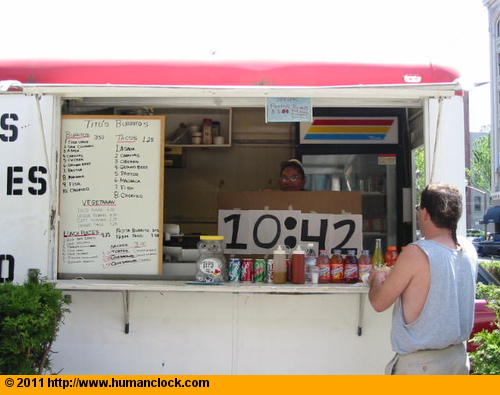 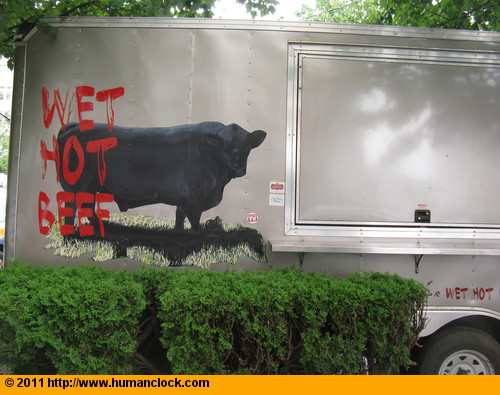 This is where the album cover photo of Sleater-Kinney's "The Hot Rock" was taken. 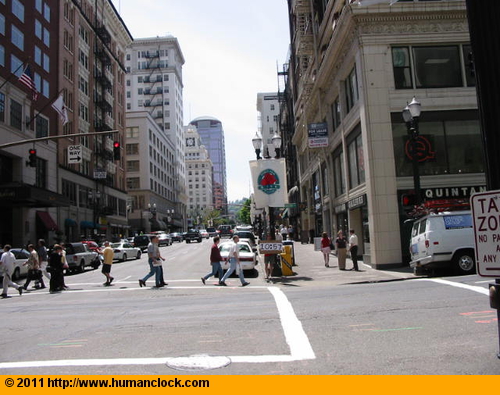 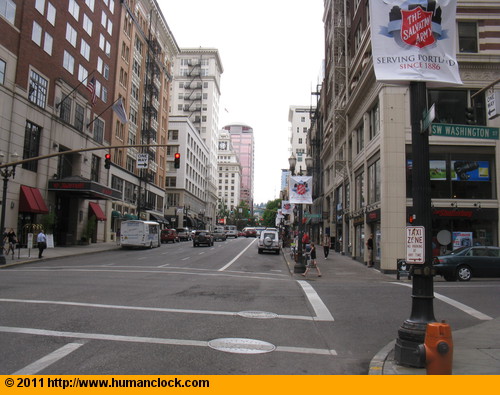 We have two "altweekly" newspapers here in Portland. I thought it would be funny to juxtapose the newspapers in front of each of their offices.

No, Willamette Week didn't go out of business like many newspapers, they just moved offices. In 2006 they did give me a nice little blurb when Human Clock got mentioned as being "cool" in Time magazine. 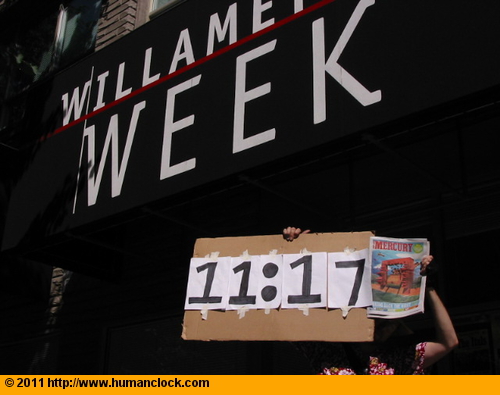 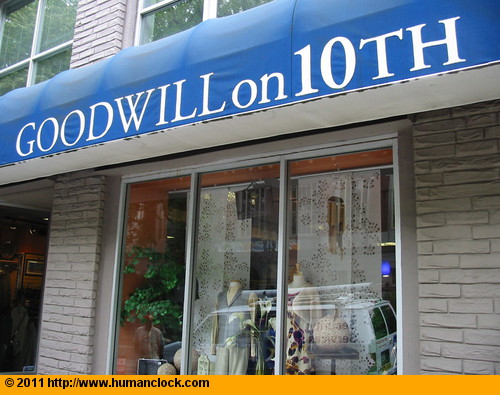 There are a lot of food carts in this parking lot now so I couldn't get in the exact spot where the photo was taken. 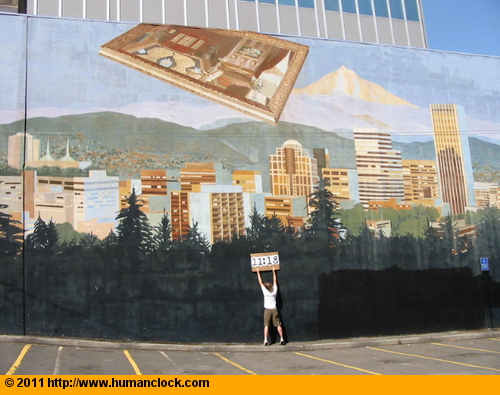 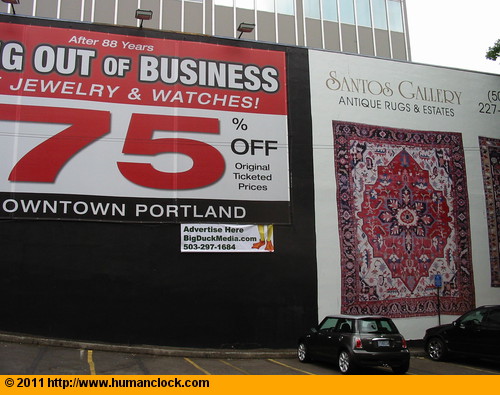