December 28th, 2001
I updated the submit a photo page with examples of photos that are NOT clock photos. As for the tube-socks-kid with the gun and the dude with the Camaro, I have no idea who they are, none, none at all. Speaking of submissions, I have a bunch to go through...but these are ones that need to be cropped in some fashion and I don't have the code for my "auto-cropper" finished yet. They will be in the clock sometime soon though.

December 25th, 2001
This site was named a Yahoo pick of the year for 2001! Thanks to Margot for pointing this out to me.

It is Christmas today, so remember the seminal words of William Squire from 1985, "Christmas is the time to say I love you." 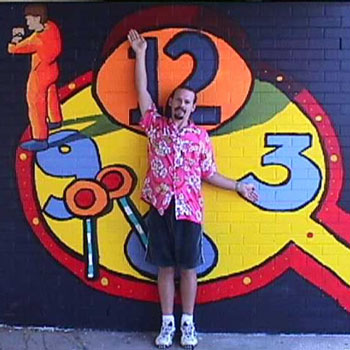 8.3% of the analog clock photos have changed! No longer do all the photos consist of the clock on my bedroom wall.

A few months ago I was contacted by Nick Coulter about doing clock photos as a school project. Nick is an art teacher at Balmoral State High School, located in Brisbane, Australia. I suggested doing an hour on the analog clock. Soooo, they painted a nifty clock on the side of their school. The photos occupy the entire 3 o'clock hour (am/pm) on the analog clock. (and yes, that is Mr. Coulter over there to the right ->)

If you are an instructor and would like your class to be an hour on the analog clock, uh, you are out of luck for the time being. The analog clock isn't fully automated yet and it takes me awhile to put photos into it. I'm pressed for time since I'm going biking in Australia around February 2002 and probably won't get any sleep until then. So I need to limit the amount of time I spend working on this website (30 hours a week instead of 50). You can still submit digital clock photos though. 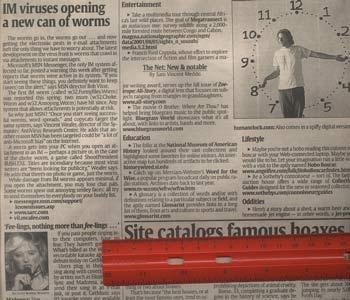 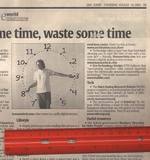 December 3rd, 2001
I added another 150 clock pictures that I have taken over the past two months, so if I took a picture of you recently it should be in the clock by now.

Also, did anyone tape the "Screensavers" show on TechTV awhile back when this website was featured on it? I never got to see it, lemme know if you did tape it and could maybe send me a copy.

November 27th, 2001
I'm in Yakima, Washington right now and there is snow everywhere! This also means that I finally have some clock pictures containing actual snow. (Plus a good one of my Dad at the grocery store talking on a payphone while eating a chocolate doughnut)

Oh yeah, a few people wrote in saying that a caller called the Mark &amp; Brian radio show in Los Angeles this morning and said she is on the clock. If you are looking for the photo, she is at 9:55am.

November 25th, 2001
I updated the submissions gallery with a bunch of new submissions. I finally received a submission that was taken in front of the Sydney Opera House in Australia (5:08pm), plus some really good ones from Tokyo (look on page 5 of the gallery).

November 24th, 2001
I finished the code for the thingy that puts photos into the clock. So if you send in a submission, it should be in the clock in one or two days instead of one or two centuries. I added about 300 new photos to the clock last night...look for 'em.

November 21th, 2001
I'm super close to having my new "submissions engine" finished, which means I'll be adding about 400 new photos to the clock in a few days. I had to rewrite the whole thingy that I use to put photos into the clock. The old one was partially Windows (tm) based and sucked accordingly. I'm going to Yakima, WA today, so I should be getting some clock photos from there rather soon.

(Hey, I'm not some city-slicker razzin' on country folk...I went to a rural high school, where every kid was issued a Toyota 4x4 and AC/DC's "Back in Black" upon turning 16. I of course had to go against the social norm and get an '84 camaro and listen to Eagles' "On the Border" instead).

November 6th, 2001
Jokes are back in the site if you know where to look for them. When I redid the site I forgot to put the jokes back in. Thanks to Jennifer for pointing this out. Oh yeah, I have about 200 unanswered emails in my inbox and a semi-truck load of submissions to take care of. I'm doing HCSAPW right now (Holy Cow Some Actual Paying Work) and am a bit behind on things.

November 1st, 2001
New version of the clock site is online. Your clock still might be an hour or two off because of the Daylight Savings Time change. You can fix this on the control panel of this site if this happens. I built a submissions gallery during the month of September, but then had no place to put it on the site, so I ended up redesigning the site. One of the biggest additions to the clock is the fact that you can run the thing in a small window now. Just make sure you check the "Display clock in new window" option from the control panel. There still might be a few bugs floating around that I missed, so please let me know if you find any. 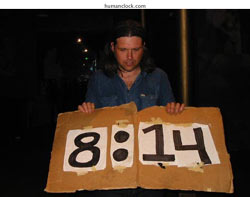 You know, it never hurts to ask...

Richard Buckner of Richard Buckner fame is at 8:14pm. I took this photo after his show in Portland, OR. Richard Buckner is a singer/songwriter type and pretty close to the greatest thing since sliced bread...trust me. I have a bazillion records & cds to listen to, but Richard never seems to leave my CD changer. 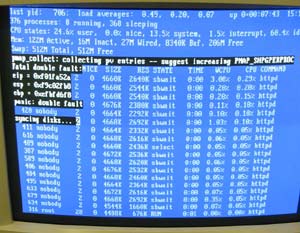 My my, what a day. The site was posted to Slashdot today. Starting at around 1:00pm, the server crashed for the first of many times. I hopped on my bike and went downtown to where the colocated server is at. The server was wedged and making a funny noise, uh oh. I rebooted the server and ran TOP. The floodgates were back open for about 15 seconds and then the server crashed again. The collision light on the switch was solid, how cool! After a kernel rebuild from Montana Myke, it seemed to stablize. The only problem now is the ISP had a skinny pipe to the internet and pages were loading terribly slow (if at all).

My favorite posting about the clock site is from user Bejasus:


Why do all the photos look like they are of Portland in its Drugstore Cowboy era? I keep expecting to see Matt Dillon dragging Heather Graham's corpse into an attic with 11:38 written on her T-shirt.
July 16, 2001 3:01am
Humanclock.com is placed online with the first log entry appears a few minutes later: 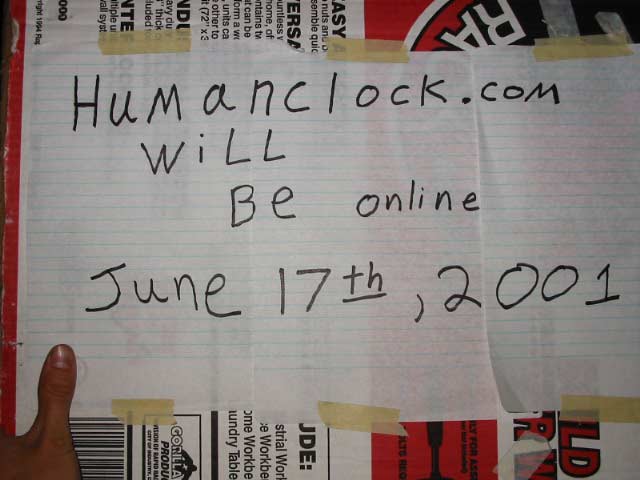