November 22nd, 2004
One of the most creative photos I've received in the last three years. From Nanaimo, BC in Canada.... 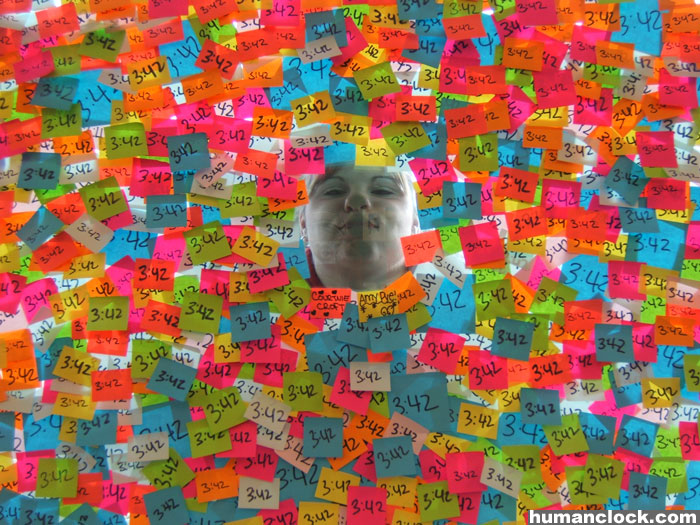 Went to a couple halloween parties in Portland over the weekend. Funny thing, I was at this party on Friday and met this girl at the chips and salsa area of the table who I happened to have taken a clock picture of three years ago. 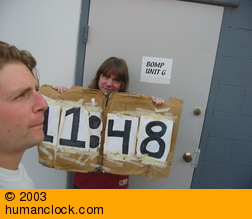 Greg Shaw passed away last week. I still can't believe he is gone. Some of you know him as the guy holding the cardboard sign at 11:48 am, others know him as the guy who had a major influence on rock and roll, others cite him as somone who coined the term "punk rock".

I was fortunate enough to spend some time with Greg and his wife Phoebe during the summer of 2003. We talked music, we talked about crazy ideas for the clock site. I had a good time. Thanks for the memories Mr. Shaw.

October 6th, 2004
Ok, finally after like nearly six months I changed the photos in the submissions gallery. Really! I have some friends living in Santiago, Chile right now. The air there is very smoggy and yucky (yes this is the dirt and crud from the air). Maybe the clean air act isn't such an evil thing, George.
September 21st, 2004 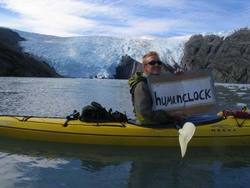 Ok, I have all the clock pictures in that I've taken up here in Alaska. That is Charlie holding the humanclock.com sign in Blackstone Bay. We spent three days kayaking and camping in this place named Blackstone Bay. I was later told that the final scene in the movie 50 First Dates was filmed here with the same glacier in the background, only it was Dreamy Drew and Mr. Sandler's body doubles on the boat. I have a short little movie that goes with above photo, but that won't be online till I get back to Portland next week. Here are some other clock pictures from the trip: 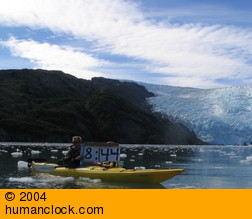 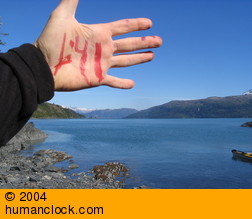 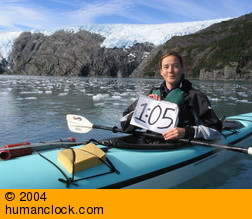 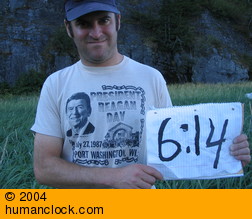 George with his
"new old" shirt 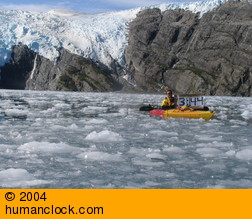 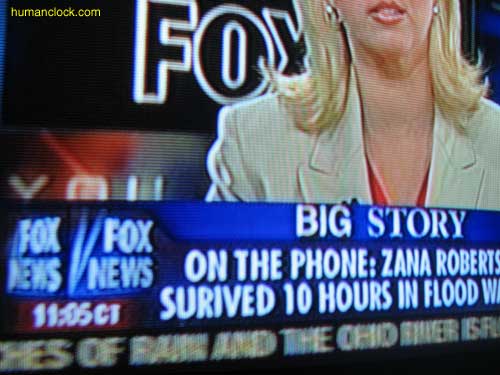 I thought I was bad with publishing typos, but it looks like the big heavies do it too. I try and shy away from advertisement or product placement on this site, but I will advertise boo boos. It even has a time in it as an extra bonus.

September 12th, 2004
Greetings from the middle of nowhere in Alaska, I am on a slow cell connection right now, so I won't have recent submissions put into the clock site until September 18th.

August 29th, 2004
Ok, clock site is running again. The site has been on and offline for the past three weeks. Hopefully the issue was a bad hard disk. I've been really busy with Actual Paying Work (tm) and got behind with the clock site.

You can submit photos again too. If you have photos to send, I suggest you get them submitted by Wednesday (Sept. 1st) or so, since I'm going to United State #49 on Friday to see my Aunt and Uncle, plus George and Mike.
August 16th, 2004
Hey! The server has been having physical (and probably emotional) issues for the last week. I am hoping to get the matter resoved sometime this week. I haven't been putting submissions into the clock because of this. The hard disk is dying and I have to move the site to another server. All will be well soon....

July 11th, 2004
I changed the clock so as the minutes click onwward, the location bar in your browser also "displays" the correct time. I thought of this a couple years ago when I was biking in Australia and finally got around to it, now there is only about 1,233 other things to do to the clock site now...

I've had this photo for awhile but couldn't fit it into the site, so I'm putting it here. Thanks to Rabb and Speecher for the photo: 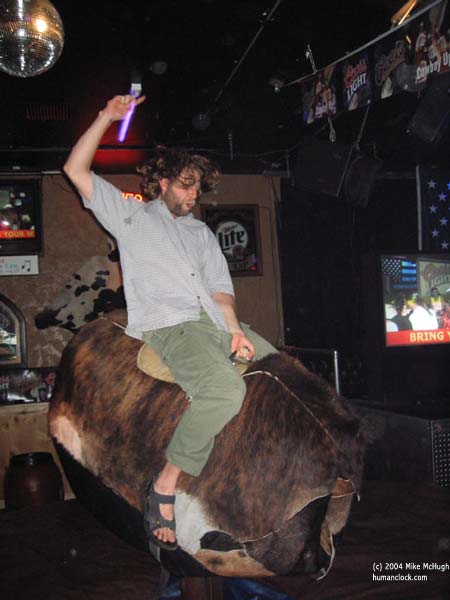 Went and rode a mechanical bull for the first time in my life a couple nights ago. I wasn't holding a clock time...too busy trying to hold on to the "bull"! I ended up staying on long a lot longer than I thought. Thanks to MCQ for the photo.
June 18th, 2004 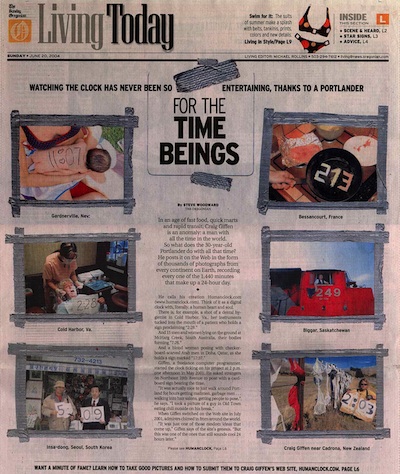 Clock site is going to be featured on the front of the living section in the upcoming Sunday edition of The Oregonian. I think they are using that photo of me with the bra fence in New Zealand.

June of 11, 2004
You can all thank humanclock.com watcher Fletcher for getting on my case about dusting off some old php code that allows you to change the clock background color. I thought it would be funny to make the background color pink and then charge people $1.00 to change it, but that is probably more trouble than it is worth. Anyway, at the bottom of the control panel under the clock you will now see a link to the color changer page, complete with a few new additional colors added to the original 2001 lineup. (think Dizzy Reed in Guns and Roses or Jim O'Rourke in Sonic Youth) 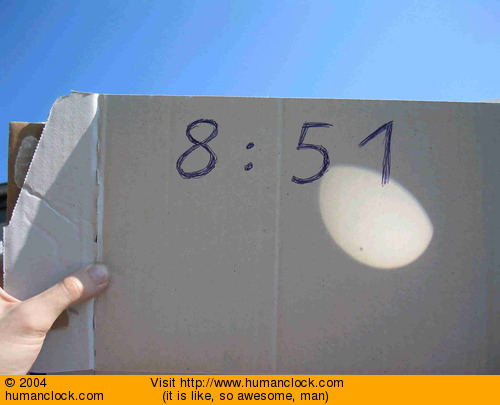 Venus passed in front of the sun today, and Torsten Schoeneberg from Dortmund, Germany turned the whole event into a clock photo!
June 7th, 2004
Clint Conley 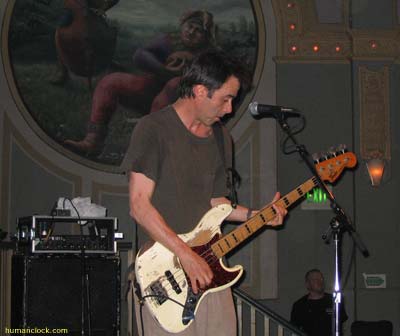 Went and saw Mission of Burma last night. Since I'm not a music journalist and just a computer programmer with about 12 adjectives in my vocabulary, I'll just say that the show was really, really, neat. It made me remember why I like music so much.

When I was riding my bicycle around the Australian continent in 2002-2003, many days and nights were spent listening to MOB's The Horrible Truth About Burma album. It was nice to hear that live album one degree of separation closer with the band right in front of me.
Roger Miller 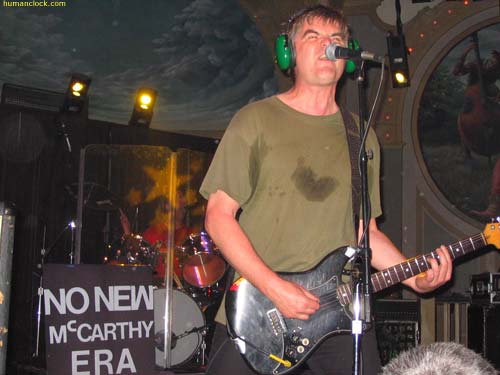 May 16th, 2004
I never was really into the group Rusted Root, but please buy my cursed t-shirt! [link expired] 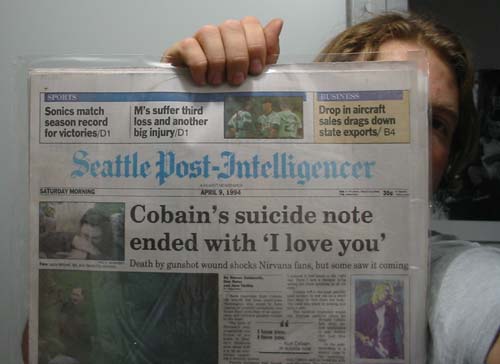 Ok, back online again! I threw money at the problem and it went away...at least for now. This is also a historical point for the clock site, because this is the first time the clock site is running on a server that isn't a 500 mhz Pentium II-class with 384 megs of ram.

If you have sent in a clock photo in the last couple of weeks, I hope to have them put into the site within the next couple of days.

April 1st, 2004
Ever seen that footage of the Beatles' car getting mobbed by fans? Ever tried getting into a house party that Nirvana was playing at in 1990 in Olympia, WA? Ever stood next to the cheesecake at a food buffet on the Spirit of Tasmania? Anyway, my point is that the clock site got a bit mobbed this morning. I woke up to find that the clock site got shut down. It seems the clock got to strut its stuff on a radio show recently. More fame!

So I moved it to a new server.... The url you might see above is just temporary. 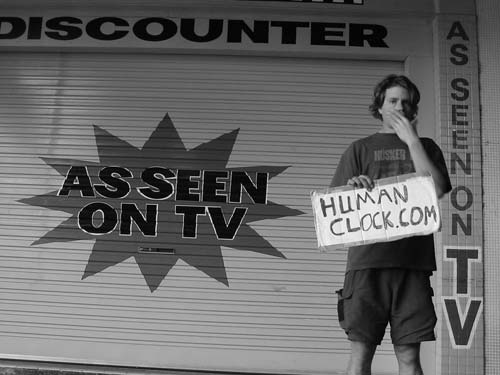 Since the clock site will be on TV soon, this an attempt at being funny. My friend Duncan took this photo, he's the guy holding up the belt sander in the "politically correct 4th place" area on the old Vegemite Sandwich Giveaway page.
If you have one of those magical Talking Pictures boxes and one of those cable/satellite things that pick up 12,321,543 different channels, the clock site is going to be featured on TechTV's "Call for Help".

March 10th, 2004
If you live in Portland, Oregon...there is an interview with me in the most recent issue of Barfly Magazine. That was actually quite a fun interview, Ink Mover Jen Lane kept buying me drinks and Nice Guy Keith (tm) took photos of me. I even took a few photos myself: 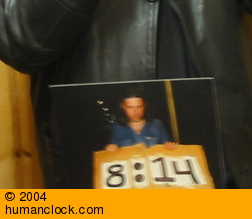 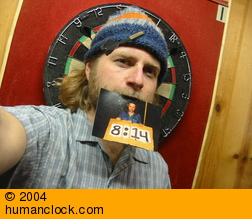 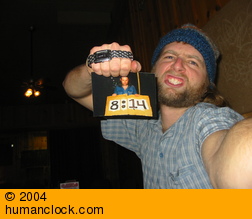 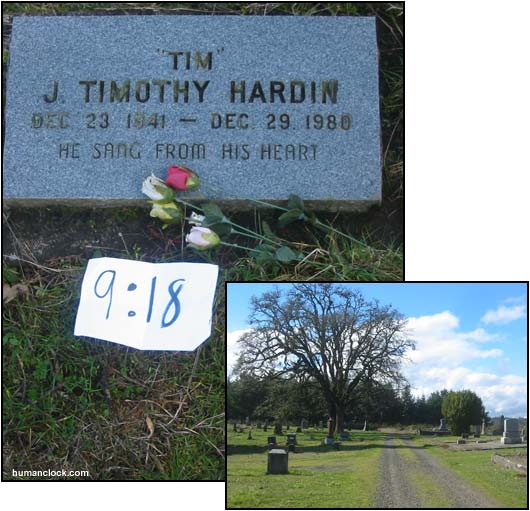 I discovered last week that Tim Hardin is buried in a rural cemetery in the small town of Turner, Oregon. Johnny Cash, Robert Plant, Nico, Bobby Darin, and Rod Stewart are a few people who have covered his songs. His music is worth seeking out if you get a chance. 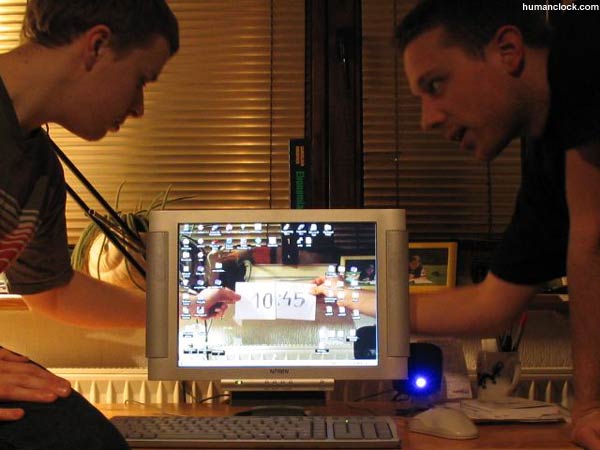 One of the first submissions I've received from Poland, how creative! I'm told it took them two hours to make this clock photo. Thanks to Ola, Pawel, and Bartek. 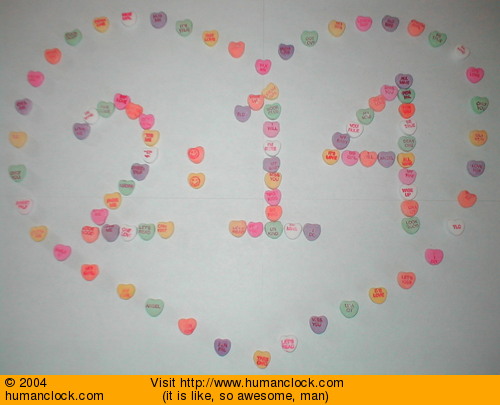 The famous piece of cardboard on this site needs some more friends on friendster.com. Do a user search on the email address "cardboard@humanclock.com" and request friendship with the cardboard!

January 28th, 2004
Economy mode is over for the digital clock, no more smaller clock images! The site has recently became popular in Germany so I had to move the clock images to a second server. More changes and stuff to come to the news page. I received some really excellent clock photos from Kenya and India that I want to put up here on the news page, but I'm a bit buried with Actual Paying Work (tm), so those will have to wait awhile.