October 23rd, 2011
Ok, new Human Calendar site is done and the t-shirts are all printed. That said, I'm not going to put it online until November because...I'm going on tour! The new Calendar site chews up bandwidth and I will need to be available in case there are issues that need to be resolved.

Anyways, I will be travelling with Star Anna & the Laughing Dogs for these six shows, come on out and say hello!


They played the Pearl Jam 20 concert recently and during the all-star finale, Mike McCready from Pearl Jam handed his guitar off to Justin, the guitar player for Star Anna. Eddie does a funny double take when he realizes that Mike is not playing guitar, you can see it in the video here around the 5:00-5:20m mark:

Members of the band finally ended up in Rolling Stone...although Justin ended up with a tambourine for a head: 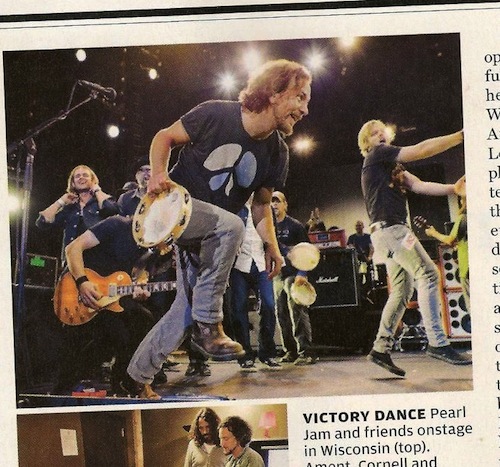 And this is one of my favorite songs of theirs, "High Water":

October 22nd, 2011
Awhile back Red Fang were touring through Canada and I hooked them up with my buddy Ari for a few days. Ari took a bunch of photos of them, including a couple clock photos of Aaron from Red Fang. 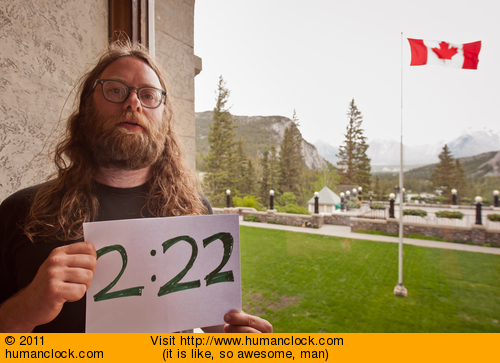 September 24th, 2011
The new Human Calendar website is really close to launching. The big holdup is all the revenue generating stuff I'm trying to sell to go along with it (well, shirts and iPhone Apps). I am getting the t-shirts printed up this week, app is close too.

Apart from tearing apart my bathroom to the studs, I did make it out to MFNW a couple weeks ago to catch The Thermals...and what a show it was. Hutch was having tech (bad electricity?) issues and he ended up smashing his guitar in a stellar fashion. Despite forgetting my good flash at home, I still took some clock and non-clock photos too.

September 6th, 2011
The new Wild Flag video is out! My backyard, Henry Rollins book, and lawnmower show up at the 2:34m mark. I am the guy on the far right shooting dice at 3:20m. What a lot of fun this weekend was:

To celebrate I went back and reshot 203 photographs to show how much (or little) things have changed since the photograph was taken. More things (including some submission retakes from 2001) will be online soon. Go check out the retrospective! 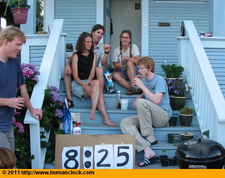 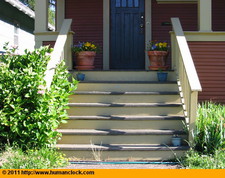 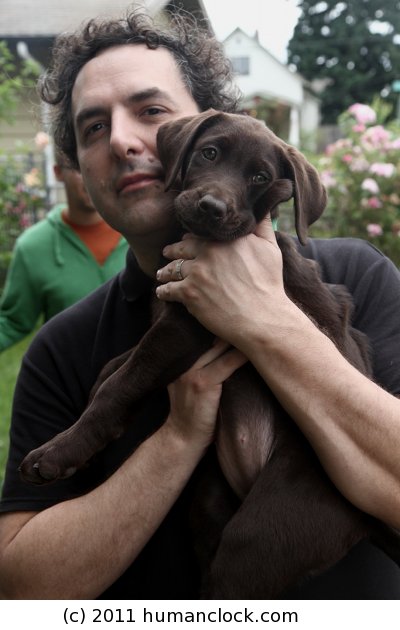 This past weekend the band Wild Flag was shooting a video here in Portland. Tom Scharpling was in town to direct the video. A few scenes were shot here at our house. I didn't take any clock photos of Tom holding up my cardboard sign, instead I got a photo of Tom holding up something better....our new puppy Freddie!

Cora and I weren't planning on getting another dog anytime soon, especially after losing Bonzi earlier this year, but a friend's dog had 13 puppies and well, things just kind of happened.

I have some photos that I'll put online after the Wild Flag video comes out. In the meantime here is a video of Tom I made last October during the Matador at 21 concert in Las Vegas, complete with singing, wrestling, crowd surfing, and one awesome tambourine toss:


Here is a video of Wild Flag playing...in the same exact spot where I took the clock photo of biking dreamboat Lance Armstrong a few years ago:

There is finally an official Facebook page for Human Clock. I would have made one years earlier but I didn't know how long Facebook would be around so it was never high on my agenda. There is a photo album on there of some of the more well known folks that have been on these news pages.

I am also in the process of going through ten years of photos adding all the unpublished clock photos I've taken over the years. I did find some unpublished photos of Cora and my old roommate Mark standing in front of my friend Bill's house, the house that was better known as the home of Matt Dillon's mother in the 1989 movie Drugstore Cowboy You will find those in the Facebook album.

Human Clock can also be followed on the Twitter thing.

Like my awesome art skills? Fullsized versions of that "art" can be found here and here.

May 2nd, 2011
Made a few more updates. Forgot to mention that the TPS reports now go up to 25 instead of 15. Thanks to Brinke for the suggestion about making past photos "clickable" on the clock. If you have the preview/postview option enabled on the clock, you can now click on the past photos and still see it.

May 1st, 2011
Wow, finally some changes! First off, this is not the long-awaited "new" version of the site, it is more like version 3.3. I did however pull elements from the new site and push them into this version. I did this because I'm wrapping up a new version of the humancalendar site right now, and humanclock.com was starting to feel like it had a lot of metaphorical auto parts and old refrigerators in its front yard. Rather than delay any longer, I spent all of last week cleaning things up and making a few changes:


• Humanclock.com actually points to a working clock
If you go to humanclock.com you now will see the clock and no longer this page as the default landing page. This is how I originally designed the site in 2001, but had to take it out due to browser limitations (aka browser bugs) at the time. IE4 and Netscape 7 had a lot of bugs and I could never get the timezone auto-detection working consistently. The problem was compounded due to the fact that back then a significant amount of users didn't have cookies and/or javascript enabled. You will now see the clock regardless of your browser (javscript and/or cookies) setup, you get stuck with Pacific US time if you do not have cookies enabled on your browser.

• Proper XHTML Validation
I cleaned up all the pages so they are all valid xhtml and got rid of every confounded <FONT FACE=...> and <CENTER> tag I found. Even better, my dated "1960's Cold War-Era Military Instruction Manual" Design is consistent across all the pages now.

• News pages broken up by year
I broke up all the news pages by year, I also added back in a few images that were here at one time but got removed.

• Clock images pre-cached
The clock image for the next minute is now pre-cached, so the image should show up a lot faster now when the minute changes.

• "Show More" link on photo locations table
This was a bit of an issue where there were 30+ photos for a given time slot. The "Show More" link only shows up if there are more than ten photos for a slot and you haven't clicked on any other photos within that minute. I have this photo locations thing setup with mini-photos on the new site but it was too much work to backport it to this version.

• "Cute Window" clock has timezone detection.
The "Gimme a cute window" clock will now work independently of the clock website. I know there are a handful of applications out there that use this (such as the unofficial iGoogle gadget, etc). I have written proper gadgets, OSX dashboard widgets, etc but those won't be available until the new site is done.

• Random text and image cleanup
In addition to cleaning up the news pages, I updated some of the text on the About page and a few other places. I also came across the little icons that were on the 2001-2003 version of the site so I just randomly stuck them places. I made these back in 2001 by firing up my Apple ][e computer and using the program Printshop. There is more about these icons on the about page.


Please let me know if you find any problems!
- Craig

April 24th, 2011
...and finally a clock photo with the actual clock
cardboard rather than index cards! 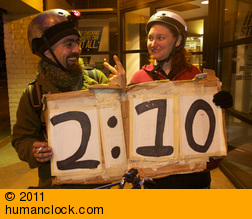 Last night at the Bridgetown Comedy Festival was a lot of fun.

The night started off with me ending up on stage with Kristen Schaal in a skit where I was given a piece of cardboard and had to do an interpretive drawing of her. The winner received an onstage "date" with Kristen. My drawing didn't win (too good!) but I got to keep the piece of cardboard as a consolation prize. This was incredibly funny because for the last three days I've been carrying in my backpack a decade-old piece of cardboard (NT of Australia) that I use for this site.

Later that night we went down to the Hawthorne Theater to close out the night. After the show Cora gave Jonah Ray a t-shirt she had made. The design stems from a "Labricorn" I made for Cora a few years back. Since she liked our chocolate lab Bonzi and unicorns, I decided to combine the two and make a "Labricorn". Fast forward a few years and we were listening to the Nerdist Podcast and they were asked to choose from a list of ten hypothetical items, one of which was an immortal dog who pooped a gold coin everytime it went to the bathroom. Cora decided to print up a labricorn shirt and sew gold buttons onto it for Jonah. He liked the shirt a lot. I took clock photos of Jonah and his girlfriend Deanna. It was dark where we were at so my flash ended up being very bright to the eyes...as you can tell by the look on Deanna's face.

After we were outside I was unlocking my bike and a couple had recognized me from being onstage earlier in the night. I told them about me now having two pieces of cardboard and ended up pulling out the clock cardboard and getting a photo of them at 2:10am. 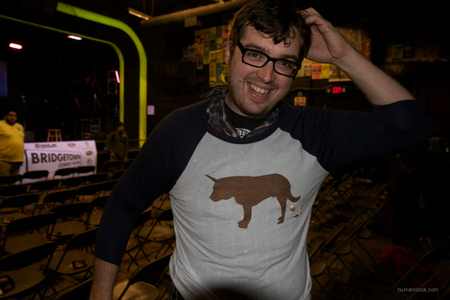 ...and with extra flash! 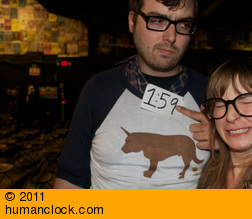 Jonah and Deanna, without extra flashbulb 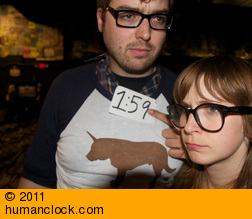 Here is my "drawing" of Kristen 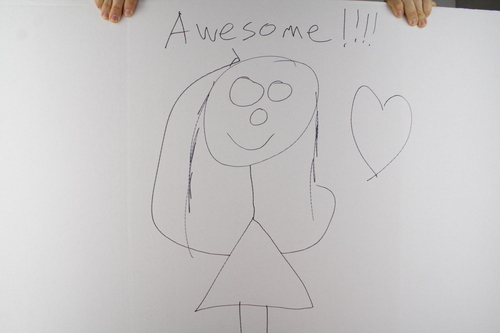 Cora got some video of me onstage earlier in the evening 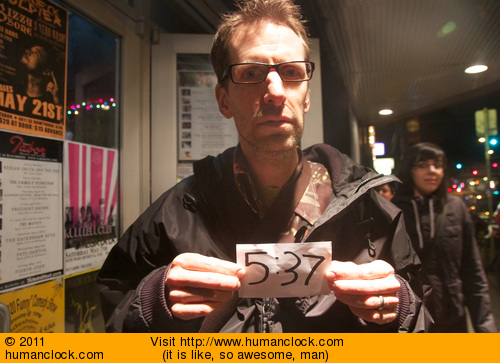 Headed out the door to attend day 2 of the Bridgetown Comedy Festival. Cora and I went last night, ran into Kyle Kinane and Peter Spruyt.
Kyle Kinane 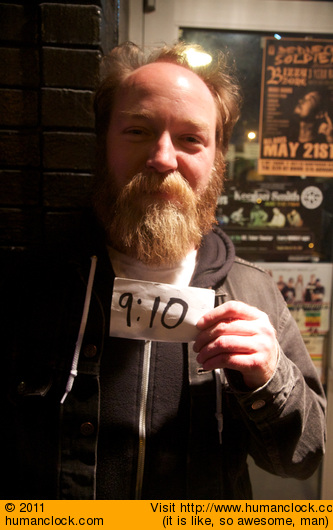 And as a bonus, a local Portland comic whom I know of as Steve 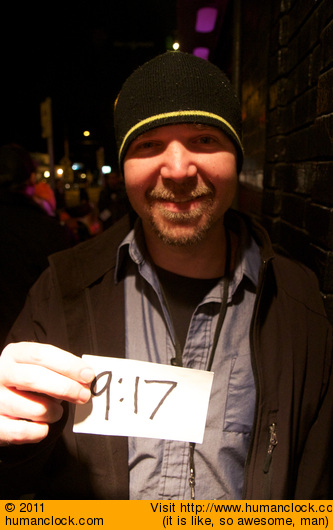 March 26th, 2011
This was taken a few days after I launched the humanclock.com site in
July 2001. He is about a eight months old here. 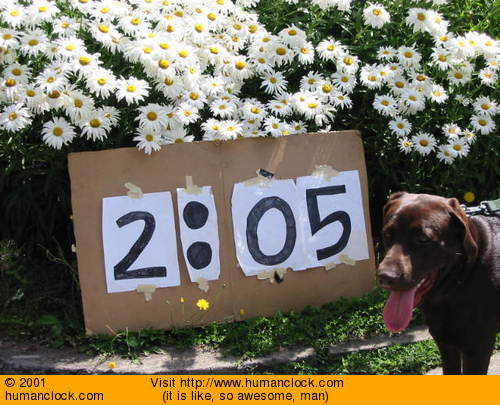 Sad news: Cora and I had to put Bonzi to sleep a few days ago. His passing was unexpected and everything happened over this past week. You have probably seen him in various clock photos I've taken over the years, stretching back to 2001 when I first started the site. We miss him terribly. More photos and videos of him are on his website (of course he has a website!): https://bonzi.tv 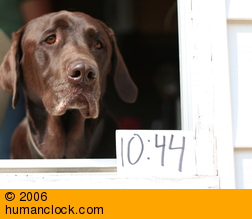 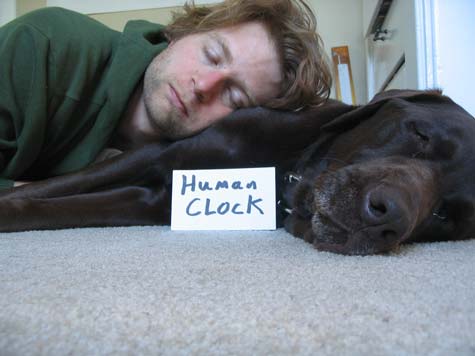 Here is Bonzi standing in for 2008 on the Human Calendar website: 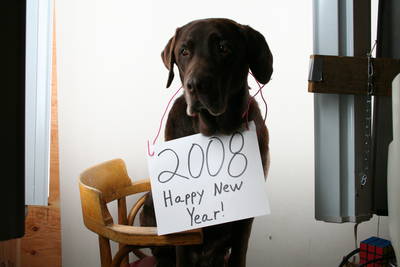 I have a lot of unpublished clock photos containing Bonzi taken in more recent years that I'll get online. In the meantime, here is one of him from 2009 and Cora and I's wedding. (shhhh! Cora and I got married in late 2008, I am a bit late in spilling the beans on here!): 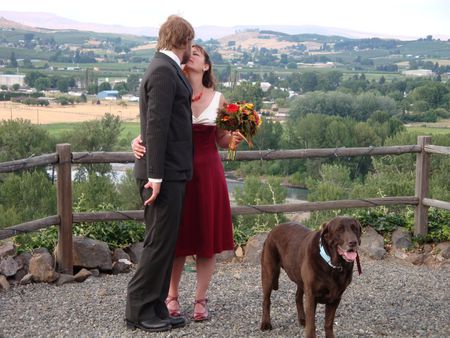 March 15th, 2011
I upgraded PHP on the server and the uploader promptly quit working. This is fixed now, thanks to Brinke for pointing this out.