December 23rd, 2003
Thanks to Kirk in PDX for sending me this photo of Kevin and I at Burning Man this year: 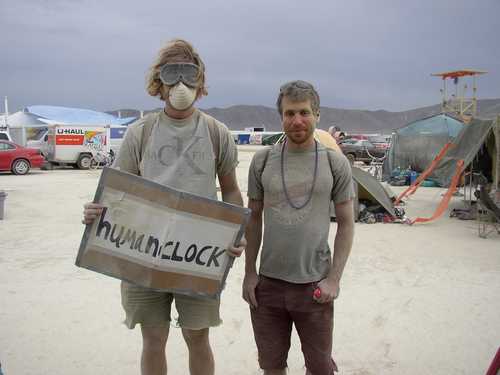 December 9th, 2003
Later today or tomorrow I'll get the timezone button panel going again for the trove of non-javascript users. Please let me know if you find any problems with the site.

December 8th, 2003
Welcome to Version III of humanclock.com! This version still doesn't have everything in it that I had planned, such as a 24 hour format clock...but I figured I'd better put online what I had done so far. I still need to go though and purge many of the photos that have unreadable times or that aren't up to par anymore. Let me know if you have any problems...I've tested this site a bunch on all different kinds of browsers, but there are still likely to be some issues here and there with things I didn't know about or forgot to fix. Oh, the "other locations" thing on the clock page, you can only look at 2-3 images per timeslot, this is done intentionally.

Much more to come in the next few months!

Ok, version 3.0 of humanclock.com is like way totally almost ready, I'm just ironing out a few wrinkles right now. I need to test some the timezone detection code to see if it works on most/all browsers with javascript. So if you get a couple of extra seconds to rub together, go to the test page [link expired] . If the time on your computer is correct, but the time displayed is off by over a half hour, please email me with what kind of operating system and browser you are using...otherwise just ignore it and go about your normal humanclock.com business.

On another note, if you want to make a bunch of new friends on friendster.com, you can be friends with the famous humanclock.com cardboard. Just search for cardboard@humanclock.com
November 5th, 2003 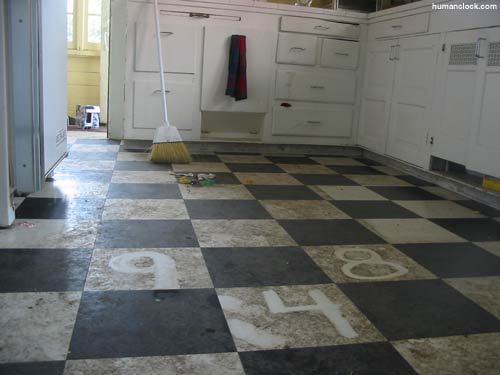 This picture I took the morning after Halloween. You can tell it was a good party when you can write a time in the kitchen floor with a wet sponge

October 30th, 2003
If you want to be on the clock site, I'll be at Critical Mass tommorow for the Halloween bike ride in Portland, Oregon, USA. Look for Axl Rose with a boombox on the back of an orange bike blaring Rocket Queen and other G & R hits.

October 25th, 2003
Clock an hour off? Then you can change it by following one of the buttons below. With the current version of the site I can't adjust for Daylight Savings Time automatically. Contrary to popular knowledge, Daylight Savings Time is no where near standard thoughout the world, countries, or even within some US states (Indiana). This is why the site cannot adjust for the DST switch autmomatically. The new version of the website I've built fixes this problem...but it isn't online yet. It is getting closer, I've been working on it solid for the last two weeks...even leaving the house a few times!

October 22nd, 2003
Are you on friendster.com? Be friends with the famous humanclock cardboard. Search for the email of cardboard@humanclock.com. 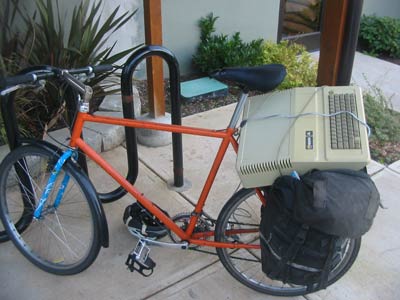 I've been working a bunch on the new clock site, things are getting closer. Went past my old house in SE Portland to get my Apple ][e out of the basement. This is the one I used to build the cute little icons on this site. I tied it to the back of my bike with a phone cord. I rode past Stumptown Coffee on 34th and Belmont and a cute girl looked at me. I thought I was pretty cool until I remembered I had this Apple ][e on the back of the bike. Then again, it isn't every day you see a General Lee Orange bike with an Apple ][e on it.

September 28th, 2003
Ugh, I woke up the other morning feeling like a bad Warrant b-side. Had fun last night at Joe's birthday party. At some point it seemed like a good idea to recreate the Abbey Road album cover on SE 20th, except the annoying cars kept messing things up.

September 22nd, 2003
Hello Italy. Looks like I'm going to need to get another webserver if this keeps up.

September 15th, 2003
The famous piece of cardboard on this site needs some friends on friendster.com. Do a user search on the email address "cardboard@humanclock.com" and request friendship with the cardboard. (8/16/03 - Hmm, it is a day later and already the cardboard has more friends than I do. That is sad...) 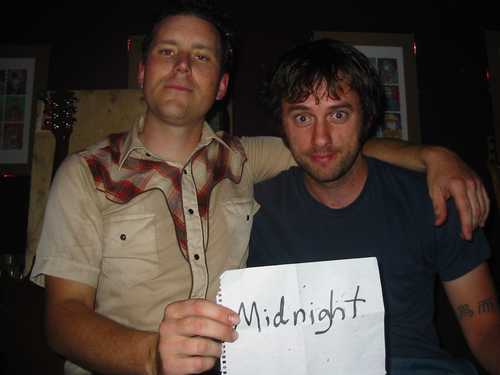 After rock and roll... 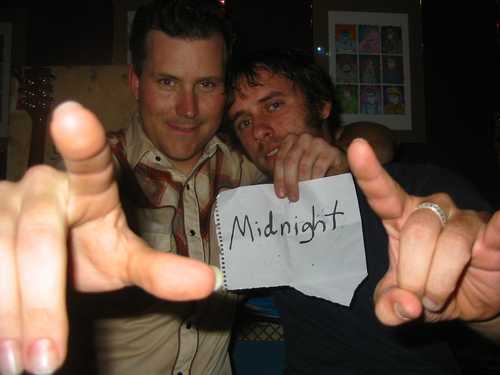 4,900 pictures and this site STILL doesn't really have any sex or drugs, but at least I'm working on the rock & roll portion. Tonight I went and saw The Weakerthans and got half the band to pose for a clock photo. (Ok kiddies, math problem solving time, how many people are in the band? answer: four)

It was a great show and they are nice guys, go see them if they come to your town. (unless you live in Uganda, I don't think they tour there...at least not yet) 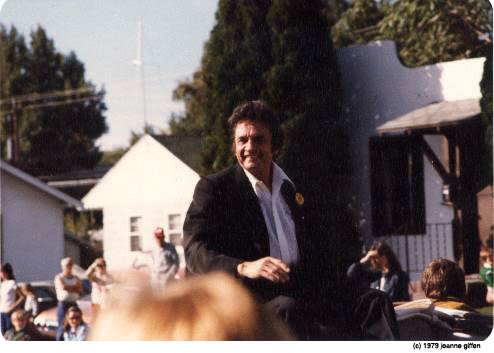 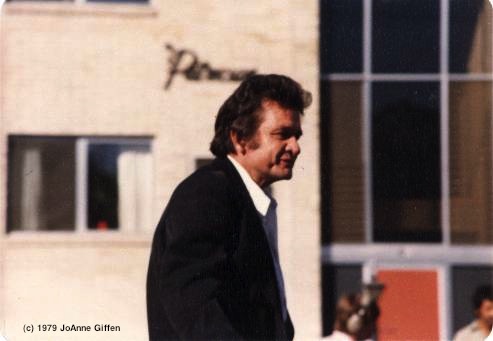 September 4th, 2003
Sometime soon I'll have a link to some of my pictures from Burning Man. The photo below is of humanclock viewers Red Girl Meg from Melbourne, Australia and Niles from San Francisco, USA. Funny thing about this picture: I go out onto the playa to take a clock picture of a friend, and then Meg comes up to me and asks if I am from the humanclock site. She introduces herself and it turns out we had talked a couple times on email when I was biking around her country last/this year. Then about a minute later another guy named Niles comes up and introduces himself to me. Niles has even sent in clock photo submissions too! So I figured I'd get a clock picture of the both of them. Notice this is a new cardboard sign....I was too paranoid about losing the original one I've been dragging around for two point five years, so I made up a new one. 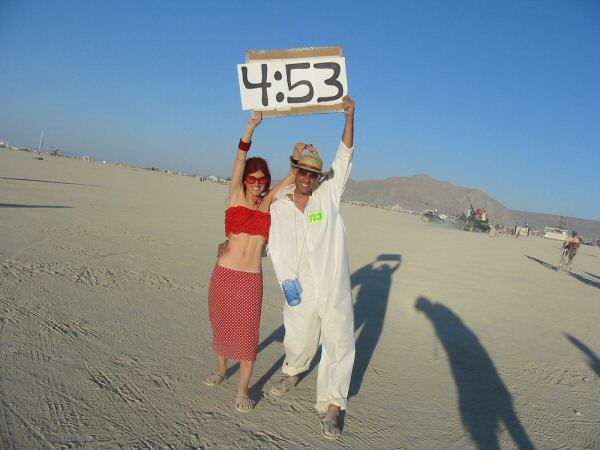 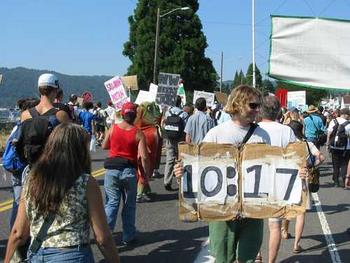 My first clock picture from a major protest 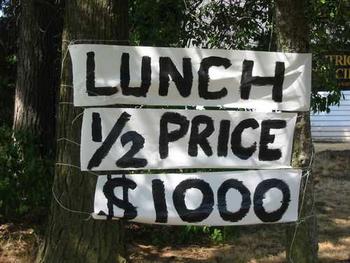 It was a $2000.00 a plate lunch. This house had a lot better offer, but you didn't get to hear George move words around the room.
August 15th, 2003
The new site will have to wait another month, so you'all'll have to put up with this somewhat crusti site a bit longer. Kevin and I are biking from Portland, OR to Burning Man in the Nevada desert. It should make for some unique clock pictures. We are leaving on August 22nd and will be back in early September.

August 5th, 2003
The site was down the last couple of days, weird DNS issues or something. Everything should be ok now. Well, wait...access still seems spotty for some people. I gotta go get another roll of duct tape and tape the DNS back together, then maybe things will work better..

Bike trip is officially over, now I find myself on a Saturday afternoon in the basement of my parent's house,listening to my old Skid Row CDs from high school. Who would have thought I would have ended up like this?

The photo above (of Sara!) was taken while I was in LA last week. She was driving me around LA one night and pointed out that particular public bathroom. If you try to visit humanclock.com and forget to type in the 12th letter of the alphabet, you can see other photos from that place. (That particular site has been up as long as the clock site has, little halos for all of you who didn't know about it).

Anyway, after leaving the park we drove down Sunset Blvd. I saw three Non-"A"-list actors in 10 minutes (well, Zooey Deschanel will always be on the "A"-list to my heart). We went to the Standard for drinks. Sara put on a brave face and posed with the clock by the pool. Everyone was trying to figure out what in the heck we were doing, but LA being LA, everyone acted like they didn't care. It was kind of like high school all over again.

My friend Kevin tells me we are biking to Burning Man next month...it should make for some good clock photos.

July 13th, 2003
I leave the bottom hemisphere on the 15th, spend a couple days with friends in LA, then arrive back home in Portland, Oregon on the afternoon of July 17th. Still can't believe the trip is basically over. Sniff. 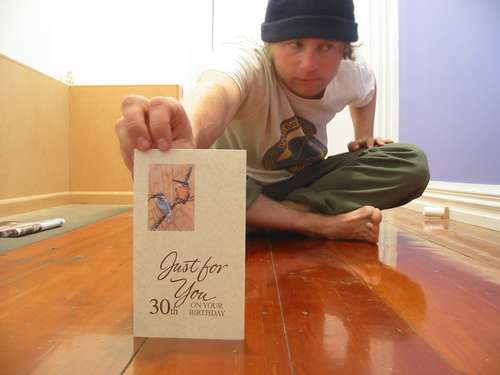 I turn 30 today. The clock site celebrates it's second birthday in a couple weeks. If Hermann Hesse were still alive, he'd be 126 years old. 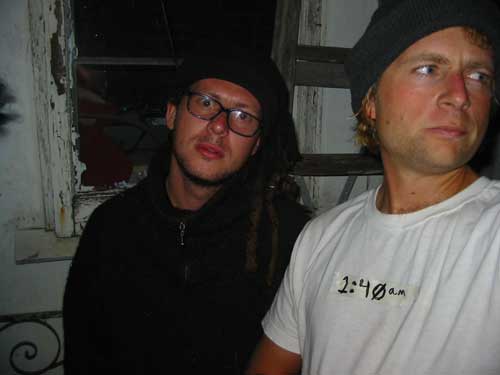 I rolled into Melbourne on March 12th, thus completing my circling of Australia on my bicycle. About 430 clock pictures in 12,602 miles; shoudda taken more! I'm heading to New Zealand at the end of the month to meet up with MCQ. I would have posted this sooner but I've been kinda busy the last few days. Saw Richard Buckner twice. I think Richard brings my Americans in Australia count up to 23 now. I met back up with Grubby and we went to a party with me ending up asleep in the van outside (not from getting drunk, it was from getting old). 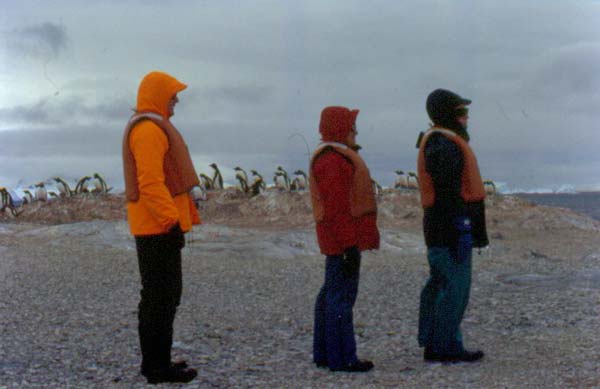 March Second, 2003
On the home stretch to Melbourne now! I'm leaving Adelaide today. I've been staying with Jens From Germany Who I met in Sydney. Even got a few clock pictures last night at Supamild. Jens forced me to say I had a good time here. 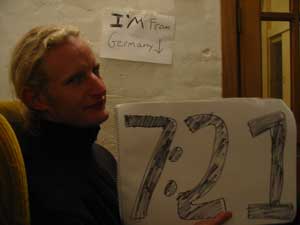 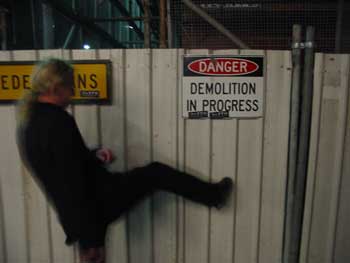 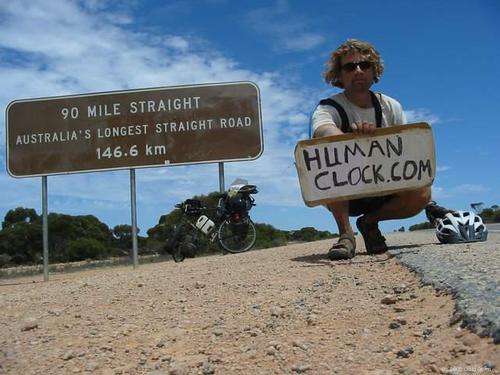 I just crossed the Nullabor and should be getting the pile of submissions put into the clock site withing the next week or so. There hasn't been much net access across the bottom of Australia. They did have it at the Western/South Australia border, but it was $24.00 an hour there!

January 25th, 2003
I've been on the road for about three weeks after a good time off in Perth. Leaving Esperance today, no more towns for 1,400km!