December 19th, 2007
He shows up on this site from time to time, sometimes even smiling. Now you can see Bonzi in video form.

Congrats to Brinke in Concord, CA for submitting his 644th humanclock photo! 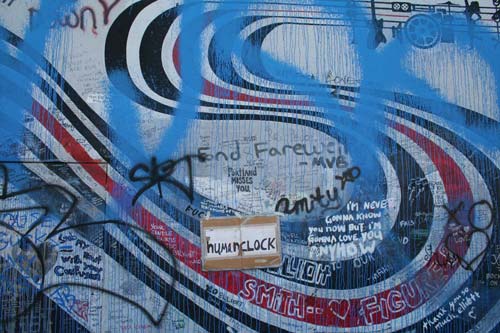 Cora and I went to Los Angeles last weekend to see friends. We went to the flea market at the Rose Bowl that has to be the Woodstock of flea markets. We were there for over three hours and didn't even make it though half of the vendors. We paid a visit to the wall above that is on the cover of Elliott Smith's Figure 8 album. On the last day we went to the strike in front of Paramount Studios on Monday and took a few clock photos there.
October 12th, 2007
The story goes for anyone who knows me is that I take a lot of video/photographs and it is years before anyone ever sees it. I finally broke this cycle and put up my first Youtube video. All of the footage here is less than two MONTHS old!

The video contains some of the footage I had from the Portland Soapbox Derby up at Mt. Tabor in August 2007. Some of the view was shot on a modified Fisher-Price PXL 2000 camera. This camera was famous because it would record creepy black and white video onto a standard audio cassettes.

Look for a quick clip of the Unicorn Girls getting ready for their 2:27pm clock photo. I didn't have my good camera with me that day (three video cameras was enough!) so the clock photos didn't turn out as well as I wanted. It was a lot of fun though. Oh, the second song is off of some compilation of Brazillian dance music I have. If anyone knows Portuguese and knows what they are singing about, please email me.

August 3rd, 2007
The movie Towncraft that I mentioned below is playing at the Clinton Street Theater in Portland this coming Monday and Tuesday (8/6-7). You can see Cora in all her 30 seconds of big screen glory (Ian Mackaye and Cora within the same minute of film!). 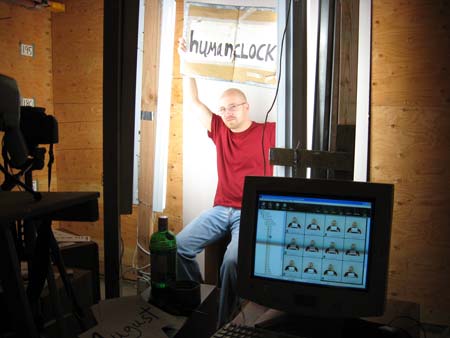 Tom otherwise known as "August" after getting his photos taken for humancalendar.com

July 24th, 2007
I just moved humanclock.com to a new (and faster!) server. Please let me know if you find any problems. Humancalendar.com is staying busy...the people on humancalendar.com are staying busy too, one of them kissed Willie Nelson a couple weeks ago!

If you are wondering why the humanclock.com site looks like a lumbering 747 held together with duct tape or why I haven't responded to your email, it is probably because I have been sinking the last three months of my spare time into humancalendar.com. I came up with the idea several years ago and just now got it finished. Most of the code was written in 2003 in New Zealand at the house of this guy named Robin. In a very strange case of synchronicity, Robin is in Portland this week and I'm meeting up with him tomorrow. The last time we saw each other I was just starting the calendar four years ago.

Basically I herded 40 friends though my garage and took a total of 3,992 pictures. New people will show up in the coming months. Click on the photo below for the full calendar.

April 30th, 2007
Oh! Now I have clock photos of not one but two Grammy (insert trademark symbol here) award winning musicians. A couple weekends ago Cora and I managed to see three concerts in about a week. The first was Richard Buckner at Dante's. I've seen Richard many times over the years, the best probably being the day after I finished biking around Australia. Long story short, I remember being in Richard's dressing room telling him lurid stories about the trip (not on the lunky.com site) and he was hanging onto every word.

Anyway, the second show we saw that week was The Thermals at the Hawthorne Theater. It was a great show, the band looked happy, the crowd was happy. I think the only unhappy person was some guy who yelled out "play some NEW stuff!" (but this person didn't say stuff). This was a first for me, usually it is people yelling out for some obscure b-side only issued in Portugal on an Edison Wax cylinder. I have a tape of a Hüsker Dü show from March 1987 where they are playing the brand new Warehouse album all the way though. Here the crowd is being treated to this great album for the first time and some guy in the crowd has the nerve to yell at them to play some of their old songs. (they were putting out a lot of material back then...so songs from 3 years earlier would be considered "old").

The third show we went to was Dan Zanes and friends. Cora's friend Colin (see way down below) plays drums with Dan. This was the most entergetic show of the three due to the audience. Dan plays music for children and adults. (you can find his CDs at Starbucks, etc). After the show Colin, Cora and I walked over to the park near the Aladdin Theater. I took a photo of Cora and Colin on the merry-go-round (milking an idea I had in 2001). We walked back to the theater afterwards to get a clock photo with Dan. Dan's tour manager was trying to hurry people up so they could get to the airport in time. After they finished packing, Dan and Colin looked at each other and said "ok! clock time!" They ran like two excited kids over to me and grabbed the cardboard. I led them over to a nearby garage and took a few photos.

April 14th, 2007
Hey, I really need MySpace friends! Maybe someday I'll get around to actually changing the page layout there.

April 12th, 2007
I've been working on updating the time songs list. It is this gigantic imposing mess of spam and duplicates (please, no more 3am's by Matchbox 20!) to wade though, so I don't keep it updated as much as I should. 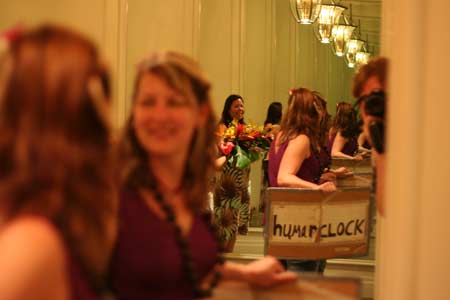 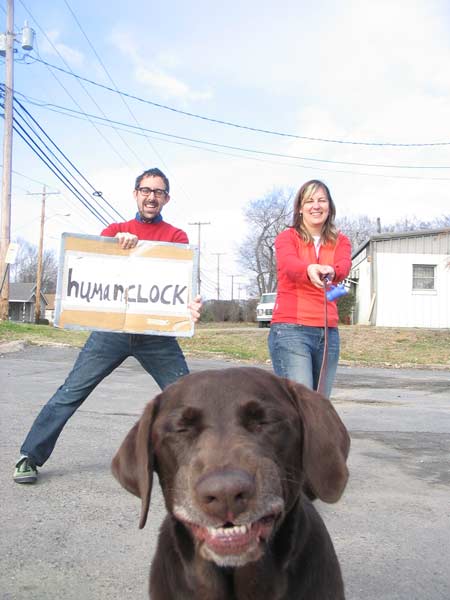 Jim, Cora, and Bonzi all showing off their pearly white teeth! I took this photo when I was in Little Rock with Cora recently. Jim was in town for Christmas and he took us to a thrift store east of town. I bought an Aerosmith 8-Track (Toys in the Attic), and we took this photo in the parking lot afterwards.

On a side note concerning Little Rock: Jim, Cora, and Colin (the guy in the Physical Graffiti photo on the news page) are all in this new film titled Towncraft. Bonzi wasn't interviewed for the film, mostly due to the fact that he was -8 years old in 1992 and he is more concerned about the Little Rock food scene instead.
March 7th, 2007
Ah, finally back online after 10 days of being stuck in Hawaii. The first part of the trip was in a shopping mall (that had hotel rooms and $10.00 hot dogs) in Waikiki. The second part of the trip was spent on a quiet beach not far from the home of Thomas Magnum, P.I. and the home of an unnamed rock star from an unknown band. (when I said his name to our host, she said "Oh yes, that is it, he is a nice man.")

My Lord!, Cora, Bonzi, and a flat bed Ford near a famous corner in Winslow, Arizona. 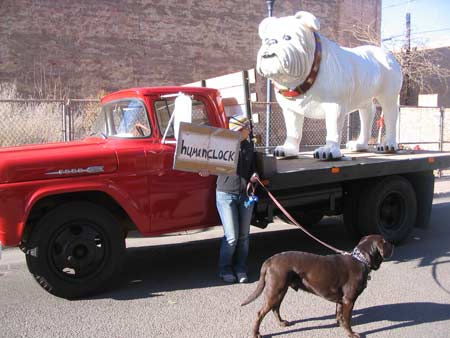