December 20th, 2002
I'm in Perth! Actually I have been here about 10 days already. Nice town, bike paths going everywhere. I'm doing a bunch of work on the clock site right now, so a bunch of cool stuff to come. 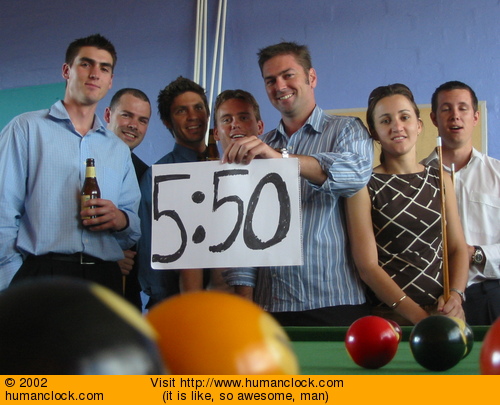 Actual Perth People, including one named "Dave" !
November 12th, 2002
Now I'm in Exmouth. Going scuba diving tomorrow so maybe I'll get an underwater clock picture with a bunch of fishies. Check this out, I finally have clock pictures from all of the continents now! This is from McMurdo Station, Antarctica (thanks to Moose in California for settin' this up): 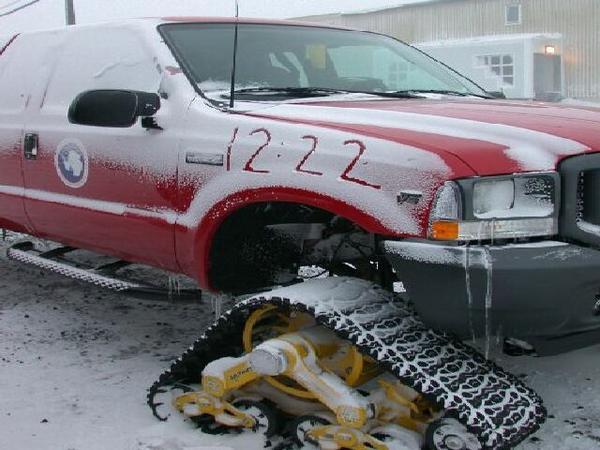 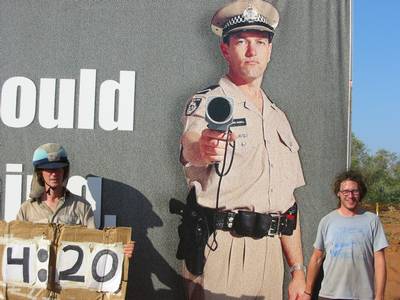 So now I'm in Broome, Western Australia. I rode a camel a couple days ago, that was quite fun. I'm spending a few days here to get this web stuff caught up, I might even go to the beach at some point. I'm not that big of a nerd, but haven't really been on the Internet for about two months now and stuff is piling up. Be sure to check out the photo contest winners!

Oh yeah, I put 40 new photos into the submissions gallery.

Saw the sign pictured on the right a few days ago near the Willare Bridge Roadhouse out in the middle of nowhere.

September 16th, 2002
I am up in Darwin right now, the travel site is updated to August 30th. It will be a few days before I can tackle the contest stuff, gotta bunch of biky stuff to get out of the way first. (broken racks, frame, etc.) I was offline for about five weeks, so I also have a bunch of email and submissions to go though also. Thanks for being patient... 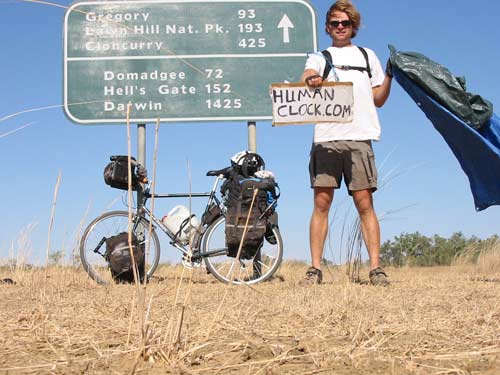 East Coast of Australia is done, biked up to Cooktown and back down to Cairns. Went scuba diving off in the Pacific and got some underwater clock photos. Heading west up to Darwin right now, hopeuflly should have some more goodies on the clock and travel sites in a couple weeks. 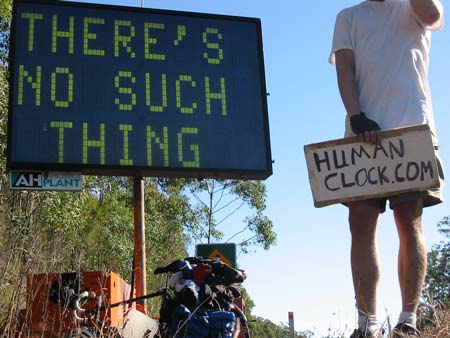 All kinds of stuff going on. I'm in central Queensland, Australia right now...bike trip is going well. I have my travel website online, it ia at lunky.com. Also, I decided to run a photo contest. Enter and you may win a Vegemite sandwich! (or at least the stuff to make one) 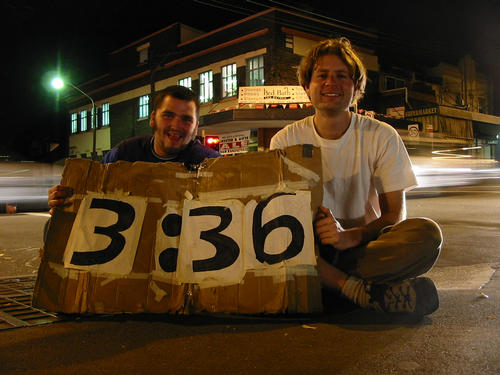 YAY! The clock is now complete! I finished up the remaining timeslots that were missing last night. The clock is complete and I get to go see Radio Birdman in 2 hours, now if I just had some ice cream.

May 19th, 2002
Yup, still in Sydney. I am going to stay here for another week, cause Radio Birdman is playing in town and I wanna go so I can make all my rock snob friends jealous. If you have an extra ticket, I need one.

Work on the clock site continues, I redid the page where you can change your time, hopefully it is a little easier for new users. I went out with a bunch of people from the hostel on Friday night. I woke up Saturday morning with a bad hangover, 50 new clock pictures in the camera, and a girl's autograph on my chest. Must have been a good night.
May 9th, 2002
Greetings from Sydney, Australia. After 2.5 weeks of climbing hills, biking big distances, and drinking bunk water which gave me the, uh, anyway....I'm in Sydney and will be here a few days. Going to go out and "clock" people around town, so look for me. I think I confused the heck out of a bunch of tourists today down at the Opera house this afternoon. I guess it's not every day you see a dodgy looking guy with a loaded touring bicycle taking pictures of himself helding a tattered piece of cardboard with "1:51" on it. I'm writing a big travel update right now (with photos even!) and will put a link to it when it is online. 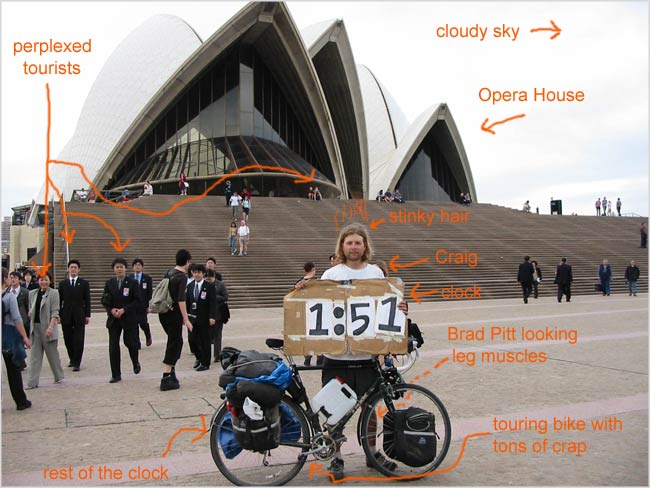 April 20th, 2002
I still didn't have a chance to put in all the clock pictures I have taken since the start of April (plus a few submissions lying about)..but they will be online soon. I spent an entire week in Melbourne buying stuff, fixing stuff, throwing out stuff, giving away stuff, eating stuff, coding stuff, and mailing stuff. I am leaving for Sydney tomorrow and should be there in a couple weeks.

April 14th, 2002
I finally got around to updating the submissions gallery...30 new photos for your enjoyment. I also fixed the bug in the colors when you select "random" for the site color. I did something else also, oh yeah, I changed the clock so it is now accurate to within about 10 seconds or so. You can now also have the option of having the clock announce the hour on the hour via sound! I've had this done for months now, but still haven't had a chance to add the cutsy graphics to the control panel. So in the meantime, somewhere on this site there is a secret link to a page where you can activate the sound announcement.

April 13th, 2002
Back in Melbourne after making a big circle around Tasmania. I just added about 320 clock pictures to the site. A few were submissions and the rest were ones that I've had piled up on my laptop since last Decemeber. I gave five "brownie points" each to all of the new photos, so they should be the first ones to come up. I'm going to be in Melbourne a couple days before I start biking north. Hopefully I'll be able to get a couple bugs in control panel fixed also (shhh!). This update only includes photos I had taken before April 1st. Clock pictures that I've taken in the last few days should be online in another few days.

March 29th, 2002
I have about 300 pictures to add to the clock site, but everything here in Hobart, Tasmania is closed down till about Tuesday...since it is Easter. Bike trip is going really good, I reached the southern tip of Tasmania a couple days ago (and six flat tires in one day...rough road). Ran into three guys surveying a road (hi David!) and got a clock picture out of them and a photograph for the front of the site. Sometime in the next few days I'll get the new photos added (including all the ones I've taken here in Australia) plus get the submissions gallery updated...it is getting a little dusty.

March 7th, 2002
Oh dear, I'm a bit behind with everything. I haven't been able to get into the clock site nor the clock email for about two weeks now. I hope to get everything caught up tomorrow though. I'm in Bridport, Tasmania right now, just got back from a ten day stint on Flinders Island. Bike trip is going pretty good. I've also been getting some good clock photos too.
February 18th, 2002
Greetings from Launceston, Tasmania...

I still haven't put any clock photos that I've taken in the past month or so onto the site. I have a mess of photos to weed through, so it is going to take me a little while to get them in. I'm also trying to get my travel website up and running so you all can follow my bike tour. So good things are coming...just gotta wait for awhile.

Feburary 7th, 2002
The sun finally came back out in Melbourne, so it doesn't look like Portland anymore. I just put about 150 submissons into the clock, sorry it took so long if your photo was one of them. The last couple of weeks have been really busy, but things are calming back down now.

February 3rd, 2002
The site is back up again. I'm in Malaysia right now, heading to Melbourne in a few hours. It is warm here and the sky is blue, quite a change from Portland. I moved the clock site to a new host and was not able to test the site at its new location. The domain name switch happened while I was in the air, thus the site was broken for awhile. All should be well now. I can't use the backspace key right now, so I'm going to cut this short, mistakes are too hard to fix.
January 31st, 2002
The clock is running again. Work needed to be done on one of the servers last night so I disabled the clock. My DSL promptly quit working right after that, so I was unable to fix the clock after the server work was done. All is well now.

I don't know if I'm going to be able to get the current batch of submissions into the clock for a few days. I'm leaving for Australia tomorrow and things are a bit hectic now. There have been some good submissions recently, including about 30 from Philadelphia, PA where two individuals walked around South Street for a few hours taking clock pictures with various people. 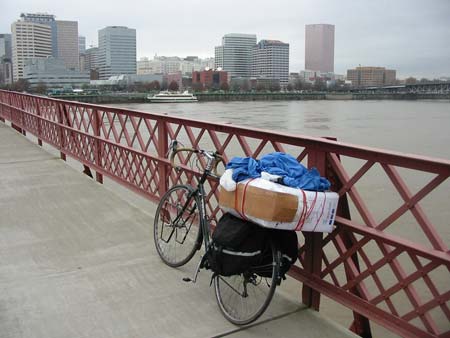 The captions are working on the digital clock again. Thanks to "Eff" for pointing this out to me. I'm in the process of moving the site to another server and was doing some cleaning. In the process I broke a couple of things so the captions were not showing up. They've been broken for about a week and I never noticed...oh well. The clock site is currently running on the server you see off to the right. Yes, I carried the server on the back of my touring bike to Amtrak downtown. I shipped is as "scrap" to its new home him Montana where it got plugged into the internet again. 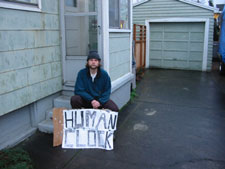 Paid a visit to the home of my friend Bill, who was not home at the time since he was working (something I should have been doing). Had I sat on these stairs about 13 years earlier, Matt Dillon might have tripped over me when he walked down them in "Drugstore Cowboy".

January 15th, 2002
I added some code that prevents this site from being hijacked within a frame, let me know if you have any problems. A couple websites that shall remain nameless are hijacking this site within a frame. This means that they can put their own advertising in the bottom part of the screen, and have the humanclock.com site appear in the top portion. If the user is going to have to see a bunch of stupid banner ads when visiting this site, I want to be the one making the cash! C'mon guys, frame hijacking is sooooo 1997.

January 14th, 2002
I fixed a bug that occured when you hit "Restart Clock", things should be working ok now. This isn't clock related at all, but did anyone see Misson of Burma play in NYC this weekend? Email me an let me know how the show was. I wanted to go, but I'm going to Australia in two weeks and have a bazillion other things going on.

January 5th, 2002
The cardboard clock is going out on tour starting next month. I'm moving my stuff into storage and flying to Melbourne, Australia for an extended bike tour around the continent. I'm planning on taking clock photos as I travel, so you should start to see a wider variety of photos in the daytime slots. I'll still be able to maintain the clock from the road, so the website won't be affected any.